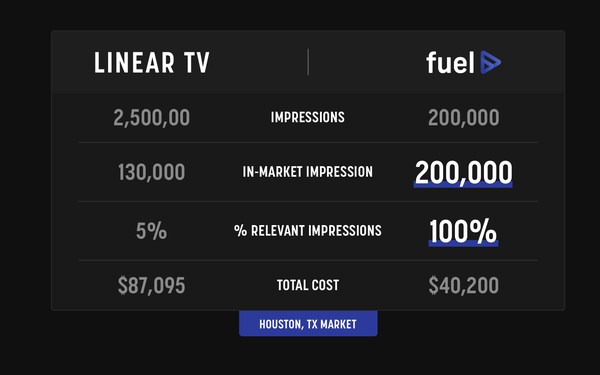 Automotive digital marketplace Cars.com is launching a digital video product focused on the $9.7 billion spent on TV advertising by the U.S. auto market.

The service is being introduced to dealers at the 2020 National Automobile Dealers Association Show in Las Vegas from Feb. 14-17.

Fuel IMV gives automakers and dealers the opportunity to harness the untapped power of digital video — which is predicted to increase at a rate of 19% to $4.8 billion in the automotive space by 2023 — by leveraging Cars.com’s 23 million monthly shoppers, 82% of whom are in-market to buy.

“Automotive advertisers relying on linear TV to generate traffic are wasting money,” Evans tells Marketing Daily during an interview at the auto show in Chicago, where Cars.com is based.

Before he joined Cars in November, Evans was the CMO of Hyundai, where he helped develop the Hyundai Shopper Assurance program, designed to make car buying less stressful.

A recent Fuel IMV pilot revealed positive outcomes for a Hyundai dealership in the Atlanta metro area. During the test, the dealership saw a 153% increase in new users on its website, a 31% increase in organic traffic and a 180% increase in referral traffic from social media as a result of the new digital video campaign.

“Fuel’s backbone is our Cars.com audience data,” Evans says. “What we are after is helping automotive advertisers target only in-market shoppers so they don’t have to rely on the heavily inflated modeled data coming out of some of the big data providers.”

More than 50% of U.S. automotive advertising spend goes to traditional, untargeted TV — well above the global industry average across all categories — even though consumers are spending more time on mobile devices than on traditional TV, consuming content from a variety of social platforms and streaming apps, he says.

The program includes a custom campaign builder that gives dealers access to a library of creative ad campaigns and the ability to customize them to a dealer’s branding and special offers.

“Our creative also offers broader messaging opportunities, like speaking to buying now at this moment, even with a test drive incentive,” says Evans.