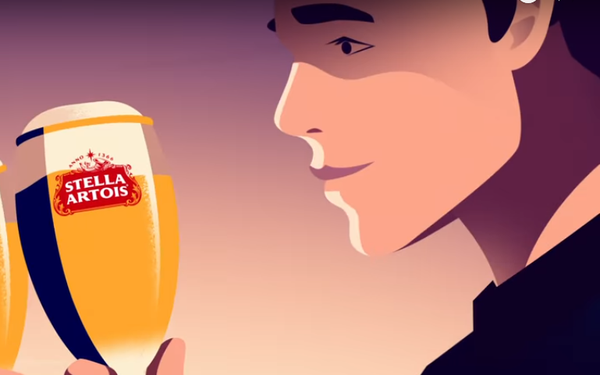 Valentine’s Day isn’t the Super Bowl for beer marketers, but Stella Artois this year is using it to launch a campaign, "The Life Artois," using imagery that recalls colorful travel art posters from the ‘40s and ‘50s.

The spots seem pitched toward women, who are not, as a rule, big beer drinkers. That’s a fact that’s been underlined as beer brands see many of its female would-be drinkers headed for seltzers, or sticking with wine and hard liquor.

There have been plenty of ads featuring manly men (and some teary, dog-loving men), but romance, from a woman’s point of view, is a far rarer theme. The Stella ads are narrated by women and at the conclusion of  “The Kiss,” the woman’s lipstick pucker becomes the central image and morphs into the Stella Artois logo.

“Valentine’s Day is the perfect occasion for Stella to celebrate coming together, being fully present and raising a toast to the ones you love,” says Lara Krug, the brand’s vice president of marketing, in a press release.

In Los Angeles on Feb 13, Stella Artois will team with the dating site Bumble to sponsor The Stella Artois Experience, dubbed an “immersive dinner social” where couples can meet or remeet,  hosted by actress and influencer Olivia Culpo. Guests will get a chance to design their own Stella Artois “chalice,” which the brand has said is the right way to drink it. (There’s also a “9-step pouring ritual.)

Postmates is also offering a special Valentine’s Day bundle: a six pack of Stella Artois beer and other goodies, including a couple of chalices, a candle with matches and a satin cloth napkin.

On some walls and billboards in  New York, Chicago, San Francisco and Los Angeles, Stella Artois has also posted “incomplete” postcards with a Valentine’s Day theme, inviting those so inclined to take a selfe next to one, and send it to someone special.

The one at 31st and Seventh Avenue expresses love by promising a touching, selfless act. It reads: “I am ‘I’ll-pick-you-up-at-LaGuardia’ in love with you.”

“The Life Artois” campaign’s arty style debuted  at the recent Super Bowl when it offered boat rides from its seaside Port de Stella.  (It sponsored the same kind of boat rides  last summer in New York.)