A new report offers media buyers some useful insights into how domestic and international publishers are planning to optimize their inventories and maximize their yields from the video advertising boom.

The report, summarizing research conducted by Forrester Consulting for ad-tech firm PubMatic, confirms that publishers are increasingly embracing programmatic — and header bidding, in particular. (PubMatic was an early leader in header bidding.)

But the survey also confirms that monetizing video advertising requires different capabilities and strategies than digital display advertising, and that most publishers are still grappling to one extent or another with gaps in technology and skills.

And that’s particularly true in the very sectors viewed as having the greatest potential for rapid growth: mobile and connected TV/OTT.

To probe the video ad monetization scenario, Forrester conducted an online survey with 622 sales, operations, and IT professionals at the director level and above at publishers and media companies in the U.S., Europe, and APAC last September. Forrester also did the analysis and writeup, with input from PubMatic.

OTT and CTV currently have the smallest shares, but are expected to show the fastest growth rates over the next 12 months (21% and 25.7%, respectively) as more households become connected.

* Header bidding is the top integration strategy. Publishers say that conducting a unified auction, as opposed to the traditional waterfall bidding process that may favor some bidders over others, increases bid opportunities and bid value.

Nearly two-thirds (61.3%) say that header bidding will continue to help them maximize ad revenue, and 57.7% that it’s increased their fill rates. In addition, more than half report that it enhances their demand optimization, improves the user experience, and increases bid rates. 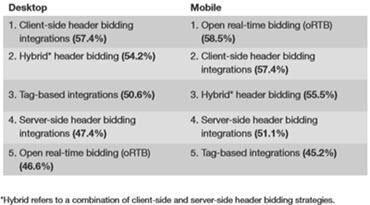