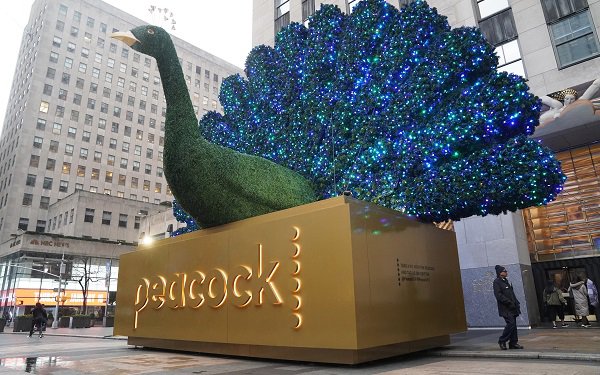 It must certainly be a challenge to create new brand names for a technology that is still brand new.

A look at the streaming-service names we have right now reveals a number of different approaches. And since the TV Blog is nothing if not opinionated, some of the names seem better conceived than others.

The major subscription streaming services that are up and running right now are: Netflix, Disney+, Apple TV+, Hulu, Prime Video, CBS All Access and, if you want to include it in this list, HBO Now. Coming later this year are HBO Max and Peacock.

So what about these names? Certainly, it is noticeable right off the bat that two of them employ plus signs. These plus signs are each affixed to brand names -- Disney and Apple -- that are well-known and widely respected, for the most part.

In these usages, the plus sign is a very small add-on to these brand names that more or less sell themselves. Some people might ask: What is the plus? Is it the fact that these services cost money to use? Probably not -- otherwise, these services would be named Disney$ and Apple TV$, and that wouldn't work at all.

Maybe Amazon should have considered naming its streaming service Amazon+. As it stands now, it is difficult to determine from online searches whether the service's official name is “Amazon Prime Video” or just “Prime Video.”

The word “Prime” is meant to link this streaming service to Amazon Prime. And they are linked: If you pay for the latter, you get the former.

But “Prime Video” without the “Amazon” feels too generic -- like prime time or prime rib. This service should be “Amazon Prime Video” in order to take advantage of the ubiquity of the Amazon brand name (like Disney and Apple).

Netflix is a great brand name. In one made-up word, it really crystallized what this company was originally set up to do. And it continues to make sense today, long after the service's original purpose (renting and selling DVDs that you would order on the internet) became outmoded.

Hulu falls into that hard-to-peg category of brand names that do not relate at all to what a company does. But at the same time, it has been around long enough now that everyone knows what it is.

No one comes across the name “Hulu” and wonders if the brand has anything to do with Polynesian dancing (“hula” dancing, which is spelled differently anyway) or Hula Hoops.

The Wikipedia entry about Hulu says the name is derived from two words in Mandarin. The TV Blog reserves the right to dispense with explaining their meaning. It is complicated, and essentially meaningless to the millions who watch TV content on Hulu, even if the name's coinage was important to the people who coined it.

Using three actual words, CBS All Access is a streaming-service name that accurately describes what it aspires to be: A viewer's “all-access” pass to all CBS content. The “All Access” phrase confers a sense of special privilege on the user.

But this brand might go away now that Viacom has absorbed CBS. Now it seems probable that the new ViacomCBS will develop and launch its own subscription streaming service encompassing not only CBS, but all of the Viacom content as well. It seems doubtful that such a thing would be named ViacomCBS All Access, but you never know.

In crafting the brand name for its new streaming service launching in stages this spring and summer, Comcast (NBCUniversal) came up with Peacock.

The name depends on most people associating a peacock with NBC, which has used various stylized peacocks in its logos for decades (originally to promote the arrival of color television). A large peacock appeared last month outside of NBC headquarters in New York, pictured above, to promote the new streaming service.

The peacock does have a credible heritage and brand association with NBC. But the brand name “NBC” would seem to be even stronger. Maybe NBCU should have gone with something like NBC Max or NBC+.

Maybe these two were even considered and rejected because of the two referenced above -- Disney and Apple -- and perhaps because of the approach of HBO Max, which is the name of WarnerMedia's upcoming streaming service.

By choosing this name, WarnerMedia may have come to the conclusion (after what must have been an endless series of long tedious meetings) that of all its brands, HBO was the one they should emphasize in the name of its new service.

Perhaps they considered all sorts of variations on Warner, Turner, and even Bugs Bunny. But the challenge for Warner may have been that no one brand name in its portfolio really encompassed the breadth of the company's content.

“WarnerMedia+” would not have been a sexy name at all for a streaming service. And they certainly were not going to name it Looney Tunes.