XFL Home Team May Be Sending Fans A Message -- On Helmets 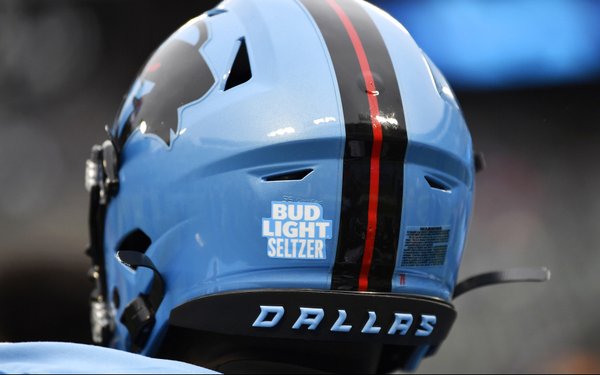 A handful of rules make the new XFL football league’s games differ from National Football League’s games, with one change that may be getting marketers’ attention.

The new league is allowing brands to affix logos on the back of players’ helmets.

The Dallas Renegades were trailblazers, making a deal to show off the logo of the new Bud Light Seltzer from Anheuser Busch InBev.

Last week, the XFL’s Los Angeles Wildcats also made a deal to feature the insignia of Monkey Knife Fight, the unusually named but successful start-up sports gaming platform, for four Wildcats games. It also has a deal for in-stadium promotions and XFL fantasy sports games.

“I think you’re going to see more as the season progresses,” said Jordan Schlachter, chief marketing and commercial officer of the XFL, in an interview with Variety.

Corporate logos are now all over sports arenas and stadiums -- except, until recently, on the uniforms.

But the NFL still doesn’t allow it; nor does Major League Baseball or the National Hockey League.

Still race cars and their drivers have been covered in logos for years. The National Basketball Association has allowed corporate logos on players' uniforms since 2017-18.

And Major League Soccer has long allowed brands to “sponsor” jerseys (as do teams in foreign leagues),  and this year has allowed teams to use another company's patch on one of the uniform’s sleeves.

Mostly, these logos don’t seem to bother fans much. Since 2011, the MLS team Philadelphia Union’s jersey has been sponsored by Bimbo Bakeries USA, a division of the  Grupo Bimbo Mexican bread company -- and some fans have complained about seeing the word "Bimbo" emblazoned on uniforms. This year Bimbo is using the logo of another one of its brands, Arteseno, on the Union's away uniforms.

It seems corporate logos are the wave of the future for all professional leagues, as brands show their eagerness to try this trend. One big reason why: Nothing on TV is seen by as many millions at the same time as sports. And for all leagues, branding whatever they can helps pay the ever-escalating players’ salaries. It’s been estimated the NBA teams’ patches generate a total of $150 million a year.