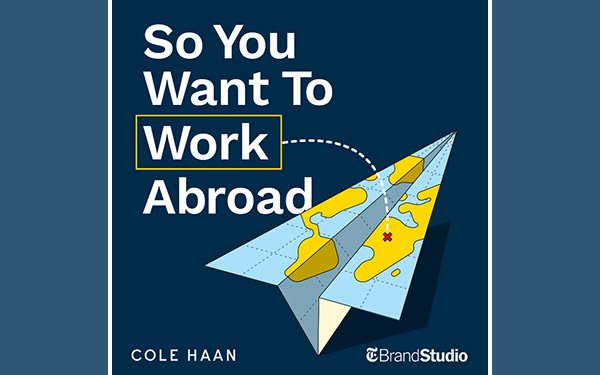 The podcast, “So You Want to Work Abroad,” is hosted by Dylan Thuras, cofounder of digital travel media company Atlas Obscura.

The six-episode custom podcast will focus on what it takes to work internationally, featuring input from well-known entrepreneurs and innovators from different industries.

The podcast is part of a longstanding partnership between Cole Haan and Giant Spoon. It targets younger audiences trying to take their careers global.

"Cole Haan's customer isn't one tied to a desk — the world is their workplace," stated Trevor Guthrie, cofounder of Giant Spoon. "Through these intimate stories, we're providing an audio toolbox that can fuel their career beginnings, no matter where work takes them."

Each episode will profile people who have lived, worked and built their careers and businesses abroad. The first 20-minute episode has guests “tackle everything from resume boosting to the cognitive benefits of adapting to a new culture.”

The second episode features host Thuras talking “to The Muse founder Kathryn Minshew and expat-transition coach Katia Vlachos on tactics for a global career, from finding opportunities with your current employer to freelancing in a new country.”

Other episodes discuss learning a language to understand cultural nuances and how to prepare for setting yourself up abroad, including visa tips and how to connect to an expat community.

Along with Thuras and Vlachos, the podcast series will have recurring appearances from experts Tsedal Neeley, Harvard professor of business administration, and Bozena Pajak, head of learning science at Duolingo.

The podcast is launching during a time when the desire to work abroad is at an all-time high, according to the companies.

About 71% of Gen Xers and 75% of millennials are interested in working as an expat — but only 15% of Americans have actually done it, according to the 2019 MetLife Worldwide Benefits Survey.

“So You Want to Work Abroad” will release a new episode every Monday.