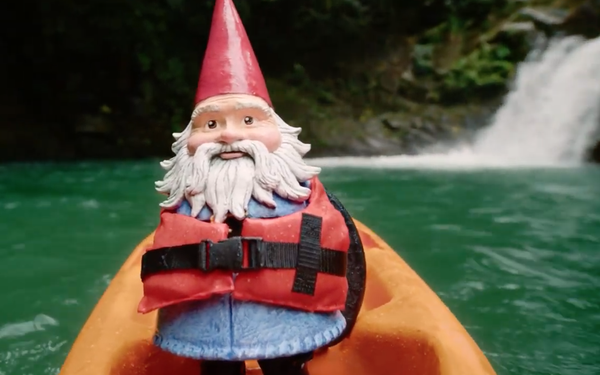 Travelocity is bringing back its “Roaming Gnome” spokesperson in its first national brand campaign from Proof Advertising.

“Wish You Were Here” promotes the perks of Travelocity membership, which is free and unlocks benefits like an easier end-to-end user experience, personalized deals sent to travelers’ inbox and additional member-only discounts on select hotels.

While the Roaming Gnome was already a regular presence in Travelocity’s advertising, this works casts him in the leading role.

Austin, Texas-based Proof landed AOR duties in July 2019 in part because the agency “elevated our brand promise and brought it to life in breakthrough creative,” says Laura Molnar, senior manager of brand marketing for Travelocity in a release. “We’re happy to have the Roaming Gnome take on a brand influencer role and trust consumers will find Travelocity more engaging as a result.”

The campaign uses Travelocity’s existing “Wander Wisely” tagline, but it’s the first new work under that platform in more than two years and represents a new creative direction for the brand.

Ads will run primarily on TV in 30-second and 15-second versions nationally, as well as across online video and social platforms. The media buy includes ESPN and TBS, connected TV and online video platforms, such as YouTube. Proof also handles the Roaming Gnome’s social media handles, which will also feature behind-the-scenes glimpses of the campaign from the lead talent’s perspective.

In the 30-second “Puttanesca For Two,” the gnome is shown waiting for his dinner companion to show up while he talks about how the membership helps take the stress out of travel research. The 30-second “Bring A Paddle” shows the gnome strapped into a kayak but in need of a travel companion who can paddle for him.

Fifteen-second spots include “Savings That Flow Like Wine,” in which the gnome encourages his waiter to give him a bigger pour of wine, the equivalent of the savings in the membership program. “The Thrill Of Better Travel” shows the gnome having a ball zip-lining while telling watchers that if they join Travelocity, they too will get the travel they deserve.

In “Swimming In Savings,” the gnome talks about how he saved his travel companion a swan boat, but they're home scrolling the Internet for travel deals, which wouldn’t be necessary if they joined Travelocity. Finally, in “Beach Masterpiece,” the gnome shows off the best sandcastle ever built.