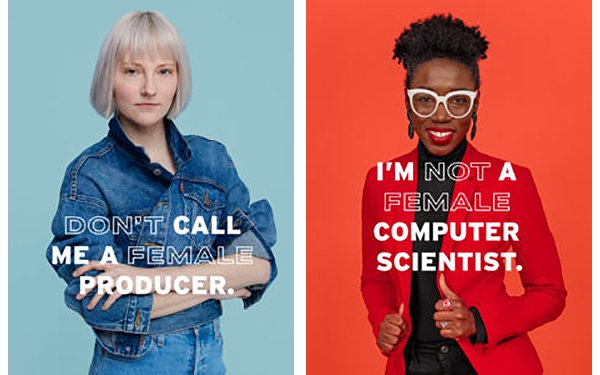 AKQA is teaming with Levi’s for the “I Shape My World” campaign to encourage people to rethink use of gender qualifiers when talking about women’s skills, talents, and titles.

One spot opens with women stating their professional titles, such as female journalist and skater girl, before challenging the notion that women have to insert their gender into their career titles, diminishing their qualifications and achievements.

Chemistry hosted a “reclaiming” celebration on Thursday, March 5 across all of its offices that invited female staffers to redefine labels from what they call the patriarchal definition of womanhood into their own descriptions. “Nag,” for instance, transformed into seeing the big picture and keeping everyone moving to turn ambitious plans into reality.

Publicis Health (PH) is running its WMN LDRS RCK series throughout the month, asking its network to nominate women leaders that impact and empower them. The women will then be highlighted on Publicis Health’s social channels as well as within the Publicis Health offices through printed badges.

PH will also host an IWD Happy Hour, screen the “MissRepresentation” documentary about how women in media are stereotyped, and work with the internal business group Viva Women of Color! to introduce a “corporate glam” workshop to provide information on the best products for skin types/complexions of women of color, as well as a live tutorial on how to create various looks.

During the month of March, Sparks And Honey, the cultural consultancy arm of Omnicom, will host panel events discussing the path to gender equality. Panelists for the March 12 session exploring cultural bias and rethinking traditional workplace norms will include several current and former CEO’s.

Rapp offices will celebrate IWD in different ways. The UK office for example will be toasting with mimosas (which is the official flower of IWD), while the NYC office will be handing out purple flowers and serving a special bagel breakfast spread. The LA office will be partnering with other Omnicom agencies in their building for a special IWD “happy hour” and the Singapore office will be hosting the first in a series of “lean in” round table discussions.

Agency wide, RAPP will spotlight women within Omnicom once a week throughout March across social platforms and solicit submissions from clients to honor select “fearless” women partners.