Death Rides 'The Pale Horse' In An Agatha Christie Mystery 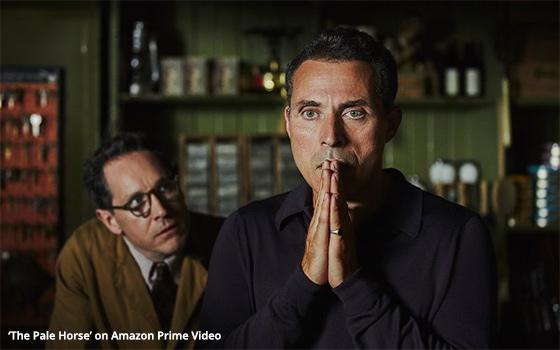 The image of a pale horse whose rider is Death comes primarily from the New Testament, Revelations chapter 6, verse 8.

“And I looked, and behold a pale horse, and his name that sat on him was Death, and Hell followed with him,” says the verse, which has served as an inspiration in our time for the 1985 Clint Eastwood movie “Pale Rider,” and for Agatha Christie in 1961 when she titled one of her last murder mysteries “The Pale Horse.”

The book has been adapted for a two-part miniseries (a total of about two hours) that begins streaming Friday on Amazon Prime Video.

The miniseries, like the book (presumably), tells the story of a handwritten list of names that is found on the body of a dead woman in an English city. The miniseries is set in the same year of the book’s first publication, 1961.

The list might be the names of people marked for murder, including Mark Easterbrook, this miniseries’ main character (played by Rufus Sewell, pictured above right). Therein lies the mystery: Why are these people marked for death, and who is doing the marking?

With its theme of a group of mostly unconnected, unrelated people mysteriously dying one by one, “The Pale Horse” bears a passing similarity to the best-selling of all of Christie’s mystery novels, “And Then There Were None” (first published under another title in 1939 that will go tastefully unprinted here).

By some strange coincidence, on the very next day we came across a 2015 miniseries version -- also English-made -- of “And Then There Were None” on one of our PBS stations. We liked the 1965 movie much more than the miniseries, from which we soon bailed.

That 1965 movie had a swinging ’60s vibe that was part of its charm. “The Pale Horse” has some too, with period settings, clothes, décor and cars that help set the mood. The music ranges widely from “Shimmy Shimmy Ko-Ko Pop” to Erik Satie.

In “And Then There Were None” (aka “Ten Little Indians”), the 10 who are set up to be murdered are all summoned to a remote location by a “host” named Owen who none of them know. They soon learn that they are to be punished for murders they have committed that no one else seems to know about except themselves, of course, and this Owen character.

The victims in “The Pale Horse” might also be harboring sinful secrets that they might now be made to pay for. But this is unclear. The only character we really get to know well in the miniseries is this Mark Easterbrook, who does indeed have a few skeletons in his closet. These happen to be adulterous and not murderous, however.

In the show, Easterbrook is no sleuth, but he takes up the challenge of investigating the murders himself because if he told the police everything he knows about at least some of the previous victims, then he would almost certainly come under suspicion for their murders.

And since he is a potential victim too, he is doubly motivated to find out who is behind these serial murders. Among those who come under suspicion are three strange women who live together in a small English village and who might be witches.

As streaming entertainment goes, “The Pale Horse” comes up a winner. Whether it conforms closely or deviates widely from Christie’s 1961 book I do not know. I have not read it.

Like “Ten Little Indians,” this story is probably just as adaptable to any time period or setting. Perhaps that was the secret to Christie’s astonishing success.