Disney+’s accumulation of some 28.6 million subscribers in just four months after launch generated industrywide envy, and rightfully so.

But even for Disney, with its unparalleled ability for storytelling — both in its entertainment content and its PR efforts — a launch of this magnitude takes more than wand-waving.

From the start, even the most diehard Disney believers have acknowledged that while its huge, golden trove of family-oriented fare essentially guarantees a built-in base among households-with-kids throughout the world, achieving growth will require original content that attracts and keeps a sizable adult contingent.

Disney has said it will spend more than $1 billion this year and $2 billion by 2024 on original content, and produce 25 new series and 10 new movies in year one, and 50 shows by year five.

But at this early juncture, about 55% of Disney+’s content is a decade or more old, versus 48% on Amazon and only 19% on Netflix, per Ampere Analysis data cited in a new analysis piece by Bloomberg’s Lucas Shaw and Christopher Palmeri.

Disney is “struggling to find the right programming” for the SVOD that is its “most important new business initiative in years,” they write, noting that the company’s suspension of production on the reboot of the Hilary Duff vehicle “Lizzie McGuire” is but one of several high-profile projects that have failed to come to fruition thus far.

Duff has said she believes her show would be better suited to the more adult content on Hulu, the streamer now controlled by Disney, and at least two other originals (“Love, Victor” and “High Fidelity”) have ended up on Hulu instead of Disney+.

While the popularity of “The Mandalorian” did much to drive early sign-ups, beyond that, “Disney hasn’t come up with shows that are popular with adults or reach the level of water-cooler chat,” notes the Bloomberg piece.

Reelgood’s analysis of viewership data from users who are subscribers to both Netflix and Disney+ found that, among the top 50 shows on the two services between November 12, 2019 and February 17, 2020, just two were Disney+ shows. “The Mandalorian” ranked #1, but Disney’s sole other title in the ranking, “The Simpsons,” was #24.

Here’s a look at the usage trends comparison through February 11: 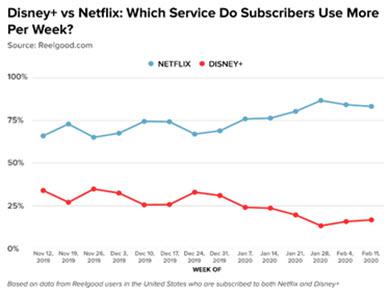 Netflix is clearly the go-to option among most of these users. And while its exclusive hold on the Marvel and Star Wars franchises (which span age demos), combined with its archives of family classics, are clearly “carrying” Disney+, “How long can Disney+ realistically keep its subscribers entertained with the classics?,” asks Maria Santos, marketing strategist at Reelgood.

Or put another way, “Does Disney+ have enough unique programming to take market share from its larger rivals?,” sums up 24/7 Wall Street’s Douglas A. McIntyre. “That is the primary question about whether it can become viable.”

So should Disney perhaps be accelerating the ramp-up for releasing more buzzworthy content with adult appeal for Disney+?

On a purely speculative level, could something along those lines be behind the seemingly puzzling new management shift wherein Bob Iger moved from CEO to chairman, and Disney parks and consumer products chief Bob Chapek — rather than streaming direct-to-consumer/streaming services chief Kevin Mayer — took over the CEO job?

Iger specifically said that he will now have the time to focus on content creation, after all — so perhaps he and Mayer will become a dynamic duo driving that Disney+ content machine into high gear. And balancing that with the simultaneous need to optimize content and strategy across Disney+ and Disney’s television network and first-run movies businesses.

After all, coronavirus has been on the radar as a potential worldwide crisis for some time now, at least among global powerhouse corporations like Disney (if not our own government).

So perhaps it’s no coincidence that Disney is making sure that Chapek is not only on board, but at the helm, to guide Disney’s crucial, worldwide parks -- and cruise ship -- businesses through possibly prolonged shutdowns and revive them in the aftermath.

And given the likely magnitude of the hits on those businesses, having Iger and Mayer focused on optimizing the performance of Disney's streaming services (including Hulu) and networks will be key in trying to offset those losses to the largest degree possible.