You Don't Want To Make President Hulk Angry (It Will Scare You!) 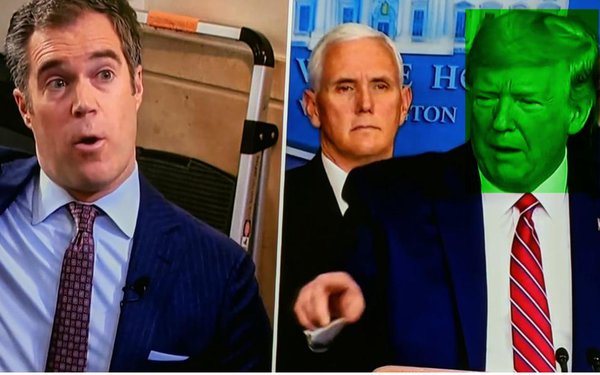 “What do you say to Americans right now who are scared?,” NBC White House correspondent Peter Alexander asked the President during a White House press briefing today.

“I say that you are a terrible reporter. That’s what I say,” the President responded, visibly losing his cool in response to what seemed to this frightened American to be a very fair and sensible question. In fact, it is one I would have asked.

“I think it’s a very nasty question,” the President continued. “And I think it is a very bad signal that you are putting out to the American people. The American people are looking for answers and they are looking for hope. And you’re doing sensationalism. And the same with NBC and Comcast. I don’t call it Comcast, I call it Con-cast. Let me just tell you something, that is really bad reporting. You ought to get back to reporting instead of sensationalism.”

The exchange followed a series of statements and questions related to the White House’s decision to order anti-malarial drug Chloroquine to test as a treatment for COVID-19, even though the White House’s chief medical authority on the response, Dr. Anthony Fauci, said it’s in the early stages of testing and that there so far is “no miracle drug” for treating the virus.

“I’m probably more of a fan [of using Chloroquine],” the President said, adding, “I’m a man that comes from a very positive school.”

“Is it possible that your impulse to put a positive spin on things may be giving Americans a false sense of hope?” Alexander asked.

“It may work and it may not work,” the President replied. “I feel good about it. That’s all it is, it’s just a feeling. I’m a smart guy.”

Later in the press briefing, NBC's Alexander repeated his question to the head of the coronavirus task force, Vice President Mike Pence: "What do you say to Americans right now who are watching who are scared?"

"I would say do not be afraid, be vigilant."

communications, health, news, politics
12 comments about "You Don't Want To Make President Hulk Angry (It Will Scare You!)".
Check to receive email when comments are posted.
Read more comments >
Next story loading