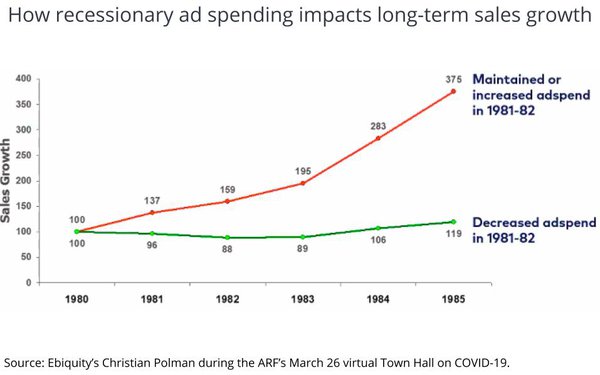 For those who don’t speak Scottish, the headline is from Robert Burns’ 18th Century poem “To a Mouse, on Turning Her Up in Her Nest With the Plough.” It translates to “go often askew,” and that’s pretty much how I feel about the effect the pandemic has been having on all our plans. Even our best laid ones.

As Burns wrote, all our foresight often is in vain when the real world finally weighs in. And while we are now living that day-to-day, it becomes even more apparent when processing something planned long in advance that it seems so out of whack, almost like we have moved from one world into another, or from one time into another.

On Sunday, MediaPost’s event team asked me if I could update the copy for our upcoming Outfront Conference, which was postponed from April to June because of social distancing and travel and meeting constraints.

The Outfront always discusses the future based on the current outlook in two timeframes: the next year, and in five years. As we’ve been writing for a couple of weeks now, I think it’s hard enough to predict what will happen in next year’s upfront, much less five years from now, but we have some early indicators, which could prove to be leading indicators, especially what last year’s upfront advertisers do with their third-quarter cancellation options.

Those options, which are due May 1, allow upfront advertisers to cancel as much as 50% of what they bought last year. If they were to do that, it would send a devastating signal to 2020-21 upfront negotiations.

But media markets are always reactionary to macro markets, and as Kantar’s Jon Swallen noted in a recent analysis of past recessions, the cycles have been compressing thanks to better and more immediate data, to the point where there’s almost no lag time between economic downturns -- and upturns too.

No one knows how long the economy will suffer from the effects of the 2020 COVID-19 pandemic, but if you believe, as our President keeps saying, that when the economy bounces back, it will do so with vigor and momentum, then betting on the 2020-21 upfront could be a good thing. Especially considering those advertisers will also have cancellation options for much of next year too.

Needless to say, trying to plan five years out would be anyone’s guess, but there are some lessons to be learned from recessions past.

That’s something a number of leading analysts, including those speaking during last week’s Advertising Research Foundation virtual Town Hall on COVID-19, reminded us of. Which is that brands that can afford to retain or even increase spending during a downturn, normally growth their category share disproportionately coming out of it. See a chart illustrating this that Ebiquity Chief Strategy Officer Christian Polman presented above.

So go ahead and make your schemes. For now I’ll leave off the way Burns did:

The present only toucheth thee:
But, Och! I backward cast my e'e.
On prospects drear!
An' forward, tho' I canna see,
I guess an' fear!