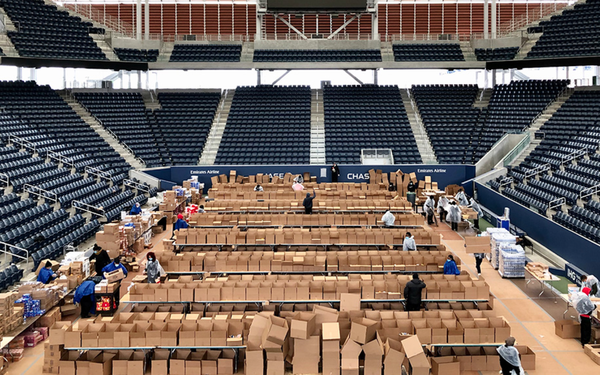 Wimbledon is cancelled and the fate of this summer’s U.S. Open tennis tournament is still to be determined. Meanwhile, construction has begun on a 350-bed hospital facility at its home, the United States Tennis Association’s Billie Jean King National Tennis Center.

New York City’s Emergency Management office is coordinating the transformation of 12 courts at the center’s indoor training facility into almost 100,000 square feet of supplemental hospital space. It is expected the first patients will be treated in the hospital early next week.

The move comes as the city continues to respond to the COVID-19 coronavirus pandemic. New York is among the hardest-hit places in the United States.

Separately, Louis Armstrong Stadium, the second-largest stadium on the grounds behind Arthur Ashe Stadium, will be used to prepare and distribute up to 25,000 packages of meals every day. Each package will consist of two days’ worth of breakfast, lunch and dinner for patients, workers and children.

Many of the same sponsors support Wimbledon, which was cancelled earlier this week by the All England Lawn Tennis Club. The 134th Championships was supposed to be held June 29 to July 12. Preparation for the tournament was to begin in April.

The tournament has only been interrupted previously by World Wars.

Wimbledon takes in $55 million each year from its sponsors, according to sports intelligence service Sportcal, while the U.S. Open brings in about $42 million per year.

“With the likelihood that the government’s measures will continue for many months, it is our view that we must act responsibly to protect the large numbers of people required to prepare The Championships from being at risk,” according to a statement.