It's A Lot More Than The Economy, Stupid 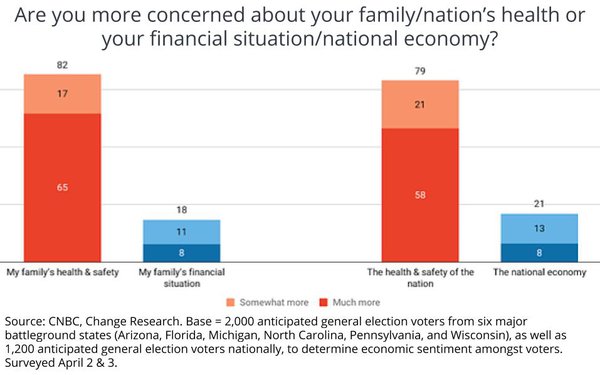 Yes, in normal times, it is mainly the economy. But these are not normal times, and there's an even bigger existential threat than a financial one on the minds of most Americans, including those in Battleground States.

The inclusion of that last state is especially relevant and topical today, as Wisconsin holds its state primary in the middle of a pandemic, despite its Democratic governor's executive order to delay it and allow for more mail-in ballots to keep Wisconsin voters out of harm's way.

The decision to stick with today's original primary voting date was the result of the state's Republican-controlled legislature and Supreme Court, as well as a ruling from the U.S. Supreme Court, and based on the CNBC findings, I'm going to guess this will actually backfire for them in the General Election. (See individual state voters' responses below.)

The reason the biggest factor in elections has always "been the economy" is because of the way people are hard-wired to deal with threats. In modern society, most of us feel economically vulnerable to short-term changes in our personal finances, and the macroeconomy -- and the way our government's try to mange it -- the greatest independent variable influencing it.

In our mammalian brains, the economy is a proxy for food, shelter and clothing, so when we cast our votes many of us are thinking -- or at the very least emoting -- which candidate will be best at providing us that short-term security. Never mind that nationally, Democratic Presidents have historically done a better job of managing actual economics, for many voters still feel Republicans might represent a better option, because of their populist laissez faire economic appeals like deregulation, anti-immigration, low taxes (albeit high deficits and national debt), even if they normally don't work out that way.

But I'm going to argue that a pandemic trumps economics as the most pressing issue for most Americans, including those in battleground states, because it is a more immediate and tangible threat to our existence than the security of food, shelter and clothing, or even Netflix.

I can't prove that based on past pandemic elections. The 1918 presidential election -- during the height of the Spanish Flu pandemic -- went to an incumbent Democrat: Woodrow Wilson. But Republicans gained six Congressional seats.

But that was in an era of far less public data and real-time media coverage about the government's handling of the pandemic, as well as the political motivations involved in national, state and local policy decisions (see Wisconsin).

I'm not saying any Republican party leaders are espousing policies that put the health, well-being and lives of their constituents ahead of economics, but it's become abundantly clear by now that Democratic leaders are focused on it with surgical precision.

Look no further than the daily study in contrast of the two major daily pandemic briefings: the one coming from the White House and the one coming from No. 1 hot zone state's governor Andrew Cuomo. One is a poorly improvised reality TV production that keeps changing its narrative like an episode or "The Bachelor," "Survivor," or "The Apprentice." The other is a straightforward, facts-based reality check from a compassionate governor concerned about preserving the lives and well-being of his constituents.

I'm not saying the economy doesn't matter. Of course it does, and the CNBC research shows many Americans are hyper-concerned about it -- and especially their personal finances -- but the research also shows those concerns were heightened by the pandemic's effect on the economy, and to a large extent, the government's handling of it.

I wish it didn't have to be a partisan discussion, but it's pretty clear by now that the policies of federal, state and local governments responding to COVID-19 couldn't be more night and day.

And I don't just mean about decisions to keep states open or to draw hard-line stay-at-home social distancing policies. I mean even those explicitly addressing the economic response.

The $2 trillion stimulus package got approved only after Democrats shifted the focus of beneficiaries from corporations to, well, us. You know -- the ones who vote. 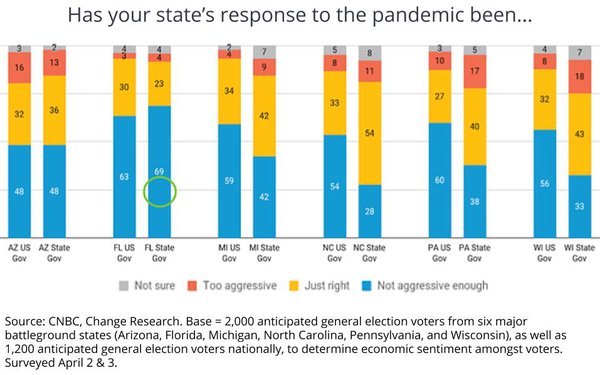 cmmr, covid-19, economy, health, politics
4 comments about "It's A Lot More Than The Economy, Stupid".
Check to receive email when comments are posted.
Read more comments >
Next story loading