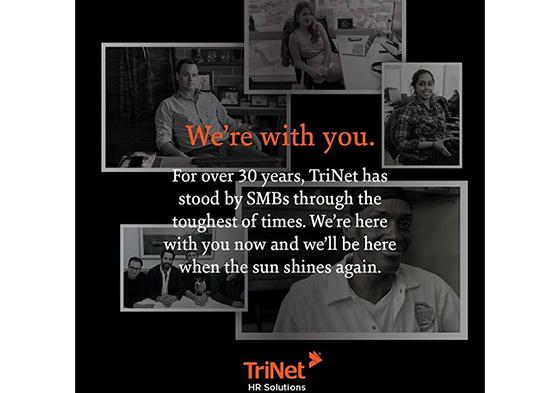 HR solutions provider TriNet is releasing a new campaign to acknowledge the challenges many of its clients, specifically small and medium-sized businesses (SMB), are experiencing during the COVID-19 pandemic with images shot by famed photographer Annie Leibovitz.

The campaign’s core messaging serves as a continuation of last year’s “People Matter” omni-channel initiative designed to showcase real customers of the company by featuring them in their actual environments. A voiceover states how the company has been and will always be around to support them.

“We wanted to do something to help our SMB customers and employees understand that we recognize the enormity of what they are facing—and they are not alone,” explains Michael Mendenhall, CMO, TriNet. “But we didn’t want to just tell them this—we wanted to show it to them to remind them we have been through a lot in the last several decades and always come out of these events with significant willpower, community, thoughtfulness, caring and resilience.”

TriNet was in the fortunate position of having unused materials on its hands from its earlier project. Leibovitz, to that end, had already taken photos of the clients. “In keeping with the authentic approach to the campaign, our customers’ employees were unaware of the photographer’s identity and there were no staged sets, pre-determined shots or hair and makeup stylists,” he says.

TriNet then developed content internally. However, since the crisis prevented the company from partnering with its regular media and third-party shops for further development, leaders instead reached out to a network of artists and production houses that “we knew could pull this together in short order,” he says. This virtual creative collaboration included Leibovitz, Garson Yu, creative director of the agency yU+Co, composer Piers Baron and music director Kathy Nelson.

“It was a lot of back and forth on editing, but again, we were able to get the spot completed – virtually – in about a week’s time,” said Mendenhall. He adds Baron was about to release his new music and “thought his first single would be perfect for this, which it was.”

The campaign appears in San Francisco, Los Angeles, New York City, Boston, Washington, DC, Atlanta via TV, digital, and social media. On TV, the spot will run on a number of ABC local affiliates and cable and local networks.