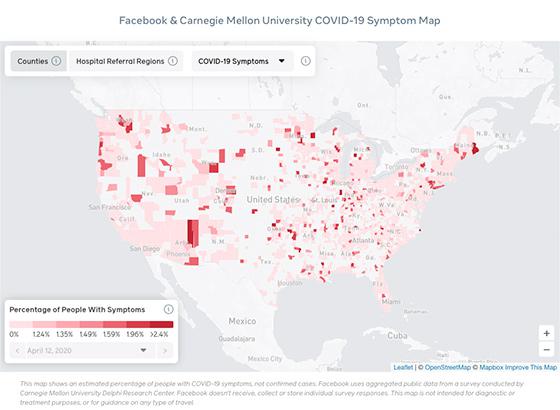 Marking what could be a transformative moment for Facebook, the company just released a public health tool that tracks the spread of COVID-19 throughout the United States.

In partnership with Carnegie Mellon University, the service specifically tracks virus-related symptoms reported by users on a county-by-county basis.

Addressing privacy concerns, Facebook is assuring users that the maps rely solely on aggregate data from opt-in surveys, which are only seen in their entirety by the researchers at Carnegie Mellon.

The surveys ask users if they have symptoms associated with COVID-19, such as a fever, coughing, shortness of breath or loss of smell.

From tracking the well being of people impacted by local disasters to suicide prevention, Facebook has offered public-health services for years. Yet, given the scale of the current pandemic combined with the federal government’s failure to paint a clear picture of the crisis, this might be Facebook’s moment to distinguish itself as an indispensable public utility.

Mark Zuckerberg spoke to the significance of the new service on Monday.

“Understanding how COVID-19 is spreading is critical for local governments and public-health officials as they allocate scarce resources like ventilators and PPE, and eventually to decide when it is safe to start re-opening different places,” Facebook's cofounder-CEO noted.

“Since experiencing symptoms is a precursor to becoming more seriously ill, this survey can help forecast how many cases hospitals will see in the days ahead and provide an early indicator of where the outbreak is growing and where the curve is being successfully flattened,” Zuckerberg further elaborated in a new column in The Washington Post.

Zuckerberg believes the service will soon prove vital for governments around the world.

“The next step is to start running these surveys globally this week,” he said on Monday. “This will allow us to expand the symptom maps to provide county-by-county data across almost every country in the world where Facebook operates.”

For this expanded effort, Facebook has partnered with faculty from the University of Maryland, while it is relying on the team at Carnegie Mellon to build an API to help other researchers access survey results.

Facebook’s response to the COVID-19 crisis could help to improve its reputation among consumers at home and abroad. A recent Knight Foundation and Gallup study found U.S. consumers hold some decidedly unfavorable views about Facebook and other tech companies.

Facebook’s response could also improve its standing among policymakers, some of whom had harsh words for the company before the COVID-19 outbreak. At the beginning of the year, for example, House Speaker Nancy Pelosi publicly bashed Facebook for what she described as its “shameful” business practices.

“They have been very abusive of the great opportunity that technology has given them,” Pelosi (D-Calif.) said at the time.
covid-19, education, facebook, research, science, social media
Next story loading