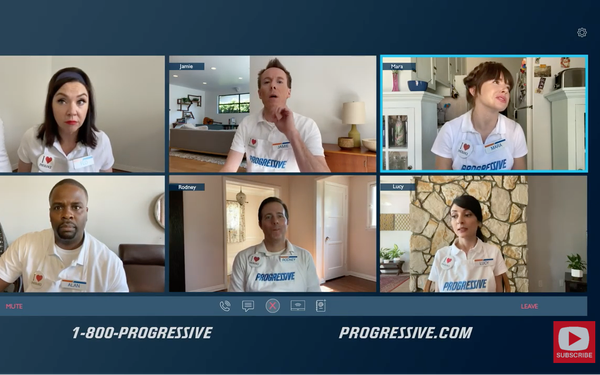 Progressive Insurance is launching a campaign this week that shows its characters in a timely new setting: working from home.

The creative taps into more “funny because it’s true” insights from what many are experiencing in this new age of remote work, such as dealing with tech issues or a co-worker who mistakenly thinks they’re on mute.

Included are three humorous spots showing the characters engaging with each other via a video conference call: “Mara Unmuted,” “Tech Issues” and “Role Play.”

“We're always pushing for first-mover advantage, and we succeeded by becoming the first ‘commercial’ improv cast to appear in a virtual video setting,” Charney tells Marketing Daily. “It’s a statement on the relevance of our superstar cast, who’s 11 years young,  and the 'funny because it's true' situations that are top of mind right now. It's the right content for the right context, as many are entering the seventh week of work from home.”

The creative was a collaboration between Progressive’s longtime agency partner Arnold Worldwide and its in-house agency Ninety6. Digital rollout began today with "Mara Unmuted," with all three spots expected to go into rotation on TV by end of week.

Hollywood is essentially closed and the company had to adjust quickly, Charney says.

“It ushers in a new production paradigm that we're all facing now, and shows the existing production model must evolve with the times,” he says. “In a ‘day’s work,’ these improv characters were able to capture three work-from-home spots, as well as half a dozen social and digital content assets. Our teams worked together to do in 48 hours what normally would take two weeks.”

"Shower Sessions" is available on Progressive’s YouTube page, where consumers can also check out additional interview and behind-the-scenes footage. It will also be available on Apple Podcasts, Stitcher, Google Play, Spotify and the newly launched Quibi.