No Hooray For 'Hollywood' On Netflix 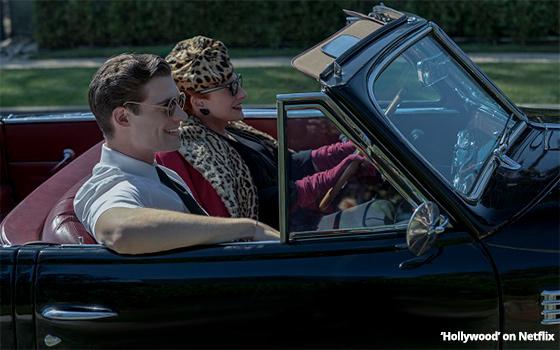 A bunch of actors play dress-up in the new Netflix series called “Hollywood” that purports to tell the stories of people who were marginalized in the film industry way back when.

The series, from producer Ryan Murphy, does get into these stories of marginalization, but without depth or authenticity.

As happens often in made-for-TV scripted dramas about the past, the end result is a respectable collection of period props, cars, locations and costumes.

But sometimes you get the sense that the actors are not acting, but merely play-acting -- as if they really possess no sense of the time period they are supposed to represent.

Sometimes, as in “Hollywood,” the script is no help. In one scene in episode one of this Netflix series premiering Friday, a bank loan officer meeting an ex-GI delivers a polite “thank you for your service” in the manner that has become popular today.

But the time frame of this Netflix series is soon after World War II. If this “thank you” phrase was popular then too, then it is news to me. It seemed more likely that the scene and this piece of dialogue were written carelessly.

On the other hand, providing a rewrite or revision of mid-century cultural history appears to be the point of this series.

Some of the feature stories published recently about the show describe it as a “what if” story that will attempt to show what might have happened if various groups that had no power in Hollywood in the middle of the last century became empowered at that time. And how might that have changed the movie business?

In the first episode that the TV Blog previewed, a few of the show’s marginalized characters are introduced.

These include a young African-American writer who seeks to become Hollywood’s first black screenwriting star, a Jewish former movie actress who complains that she could not make the transition from silents to talkies because of anti-Semitism, and various gay men who cannot live openly as their true selves but instead must find sexual partners in shady movie theaters and other such dark places.

One place where Hollywood residents of both sexes can find plenty of sex in this TV series is a flamboyant filling station where the gas-pumpers are available for hire as sex workers.

This is what leads to the scene pictured above in which one of the gas men takes a drive with the former movie actress for a tryst at the Beverly Hills Hotel.

The actress is played by none other than Patti Lupone, who would have been well advised to steer clear of this role, and this show in general.

The show may have social ambitions, but in its language, story and sexual situations, it plays like a B-level series of the type that once typified second-tier pay-cable channels such as Cinemax.

The show is an off-putting, vulgar mess. The characters seem much less interested in seeking social justice than in finding sex and making easy money from it.

In one of the first episode’s worst pieces of dialogue (out of many) one character describes the size of his endowment in excruciating detail and for no apparent reason.

The Hollywood in “Hollywood” is a cliché. We have seen its settings and characters a hundred times before. And we learn nothing new about them here unless it will come as news to anyone that Cole Porter was gay.

Yes, for some reason, this show has decided that 56 years after his death, the world needs to know that one of the great American songwriters of the 20th century was a closeted gay man.

Many already know this, but few would have imagined, as this show does, that he sought sex with gas-pump gigolos at a service station, as happens in this show.

So now, another first: The first time I have ever been put in a position to condemn a new TV show because it unfairly insults Cole Porter. It really is too marvelous for words.

“Hollywood” starts Friday (May 1) on Netflix.