The Naked Market: Launch Multiple, Socially Conscious Brands -- And Do It Fast 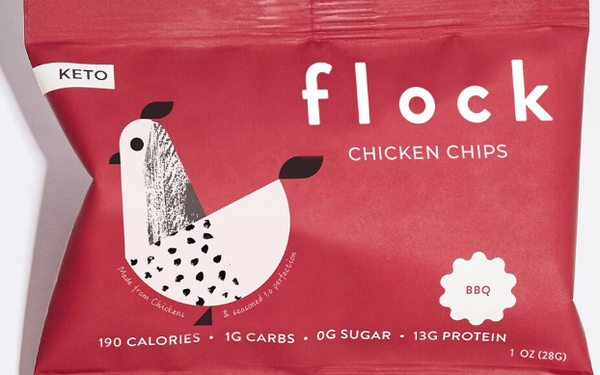 Starting with salty snacks and a breakfast product, San Francisco startup The Naked Market wants to disrupt the CPG space by responding quickly to dietary preferences and aligning each of its direct-to-consumer brands with charity.

So far, investors have wagered $3 million in initial funding based on The Naked Market’s premise. Advisers to the company include Fresh Direct founder and former CEO Jason Ackerman and Yves Potvin, who founded meat-replacement company Gardein Protein International.

In the snack space, The Naked Market has launched keto-friendly Flock Chicken Chips—which are made from chicken skin—and vegan-oriented AvoCrazy avocado puffs. A third brand called Beach House Bowls is a line of ready-to-eat acai breakfast bowls whose iterations include gluten-free and paleo.

Thus far, the company’s distribution has been almost entirely direct-to-consumer and its marketing digitally focused. Each of its products aligns with at least one charity or cause: environmental, local community support, global development and mental health.

In this interview, co-founder and CEO Harrison Fugman talks about The Naked Market’s desire to cultivate a portfolio of individual brands by emphasizing speed to market in ways that legacy CPG brands cannot.

CPG FYI: Your company has described itself as “for millennials, by millenials.” Please explain.

Harrison Fugman: When we started The Naked Market, one of the core drivers was the pain point that the founding team felt around consuming food and beverage products that met our various dietary preferences.

But when we started launching brands last year, we quickly saw the demand for our products was much broader than we expected. So it was created with us and our peers in mind, but is now much broader.

CPG FYI: Are Flock Chicken Chips—which are made from 100% chicken skin—just targeted to those who adhere to a ketogenic diet?

Fugman: We think that the core ethos of keto, which is high-protein and low-carb, is an area that is here to stay. When you look at studies from the [International Food Information Council], 47% of millenials believe that animal protein is healthy. Another study shows 41% of millennials try to avoid carbs over sugar—the ethos of a high-protein, low-carb diet.

Fugman: Six percent of the U.S. population claims to be vegan, which is up from 1% in 2014, so pretty significant growth. But equally important is that 17% of Americans claim to be primarily on a plant-based diet.

So similar to the keto relationship to high-protein, low-carb, those who follow the core, dedicated keto diet may be a smaller percentage of the population—but the number who are  focused on the broader dietary theme is quite large—and both are growing substantially.

CPG FYI: As of now, your three brands are available only on their dedicated websites. Are you considering Amazon?

Fugman: At a point in the future. When you sell on your own website, you get all the data, you control the user experience. When you can make the economics work, it’s an amazing channel.

CPG FYI: Why does a company that has raised $3 million believe it can disrupt the big dogs in CPG—particularly in categories like snacks and breakfast?

Fugman: Where we differentiate first and foremost is speed to market. We’re creating brands in months when often it takes them years.

Second is the authenticity of our brands. We’re creating mission-driven, social focused brands while most of their portfolios are pretty stale brands.

Finally, we don’t have channel conflict. When an incumbent rolls out a new product, the cost of rolling it out can mean lost revenue and shelf space for their existing brand—which a pretty tough conflict that newer businesses don’t have to deal with.

CPG FYI: Why are you determined to launch a variety of brands?

Fugman: Consumers are following different diets and they have an expectation around consuming really personalized products and brands. We felt the best way to meet these various needs in the market was through creating independent brands that tell an authentic story to the core demographic target.

CPG FYI: But that eats up more resources, right?

Fugman: We see a lot of synergies in operating multiple brands. Obviously, creating six brands is more work than creating one, but in the incremental work of creating brands two, three, four, five and six, there’s a lot of synergies between each additional brand.