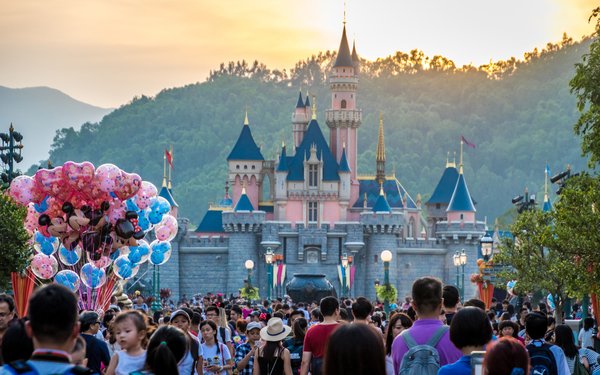 Theme parks, movie theaters and sporting events are the basis for big TV/movie and other live content. Mass gathering places.

What company depends on all three in a big way? Walt Disney, of course.

Some say those three combined live entertainment-sports entities pull in 90% of all Disney’s business. The other 10%? Disney+, the big streaming service launched late last year.

In reality, many expect it will take much longer.

After all, how would that work with COVID-19 still on the loose?

Disney could restrict attendance to 25% or perhaps 50% of its usual traffic. Plus, no doubt, require face masks -- which could come on and off at concession stands — as well as possibly flying off completely during rides!

Does that sound like a realistic experience for the high price of roughly $100 to $175 per day entrance fee? Figure fanatical Disney park fans will come no matter what. Still, all that will result in lower attendance overall, with many staying away. Good news: Less wait time on those traditionally long ride lines.

Movie theaters: Disney was far and away the biggest movie studio in terms of U.S. box-office revenues in 2019. Now, some movie theaters have been toying with spacing out attendees and leaving seats empty in between.

Disney’s "Mulan” is now scheduled in July -- moved from its original spring start. Expectations are that, at best, “Mulan” could be pulling in far less than originally forecast at the box office.

Sporting events: Question marks still exist for the conclusion of the NBA season, affecting both ABC and ESPN. Then, in the fall, if the NFL and college football gets dinged with a late start or worse, there will way more problems for the big cable TV sports networks.

Bottom line: We will see much lower advertising numbers. And that’s not all. Pay TV providers, which pay big affiliate fees to ESPN and other sports networks, are already asking for price relief with the lack of live sports.

Positives? Disney+ — as well as Hulu and ESPN+ and other direct-to-consumer businesses. Continued higher home viewing through the rest of the year is expected for those platforms. MoffettNathanson says revenue this year is still expected to sharply rise 160% to $12 billion in 2020 from $4.6 billion in 2019.

For Disney, all this will be equivalent to a wild blindfolded theme park ride. Good news: Plenty of seats are available.