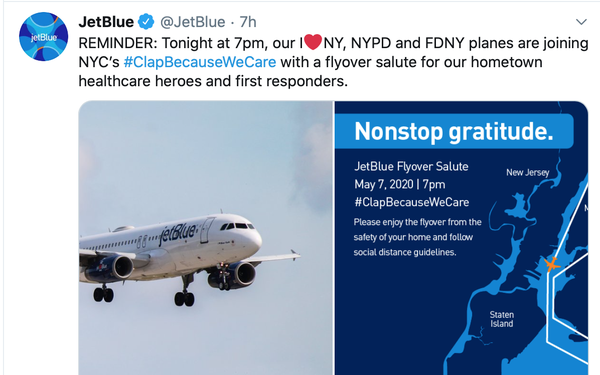 To kick off the program, JetBlue is donating pairs of round-trip flight certificates for 10,000 healthcare workers at the Mount Sinai Health System, with more than 70 locations across the city’s five boroughs.

The airline is also calling on customers to thank the healthcare heroes in their life by nominating them for a chance to receive one of 90,000 pairs of round-trip flight certificates for two. Nominations can be made at  jetblue.com/healthcarehero through May 15.

The airline will also stage a low altitude flyover in the New York area May 7 at 7 p.m. ET, the time when New Yorkers and others all over the world clap and cheer to celebrate essential workers.

JetBlue promoted the flyover on social media with the hashtag #ClapBecauseWeCare

“This is an opportunity for us to ‘fly it forward’ and show our appreciation for the heroic efforts of medical professionals, first responders and public servants -- not just here in our home of New York but around the country as well,” said Joanna Geraghty, president and chief operating officer, JetBlue, in a release.

The airline is also providing its almost 23,000 crew members with round-trip flight certificates to gift to the healthcare heroes in their life.

JetBlue has flown more than 1,400 medical professionals to New York City and other destinations to help in relief efforts. Additionally, the airline has donated one million TrueBlue points to transport Red Cross personnel and disaster relief volunteers.