Madison Avenue Vs. The Keyboard Warriors 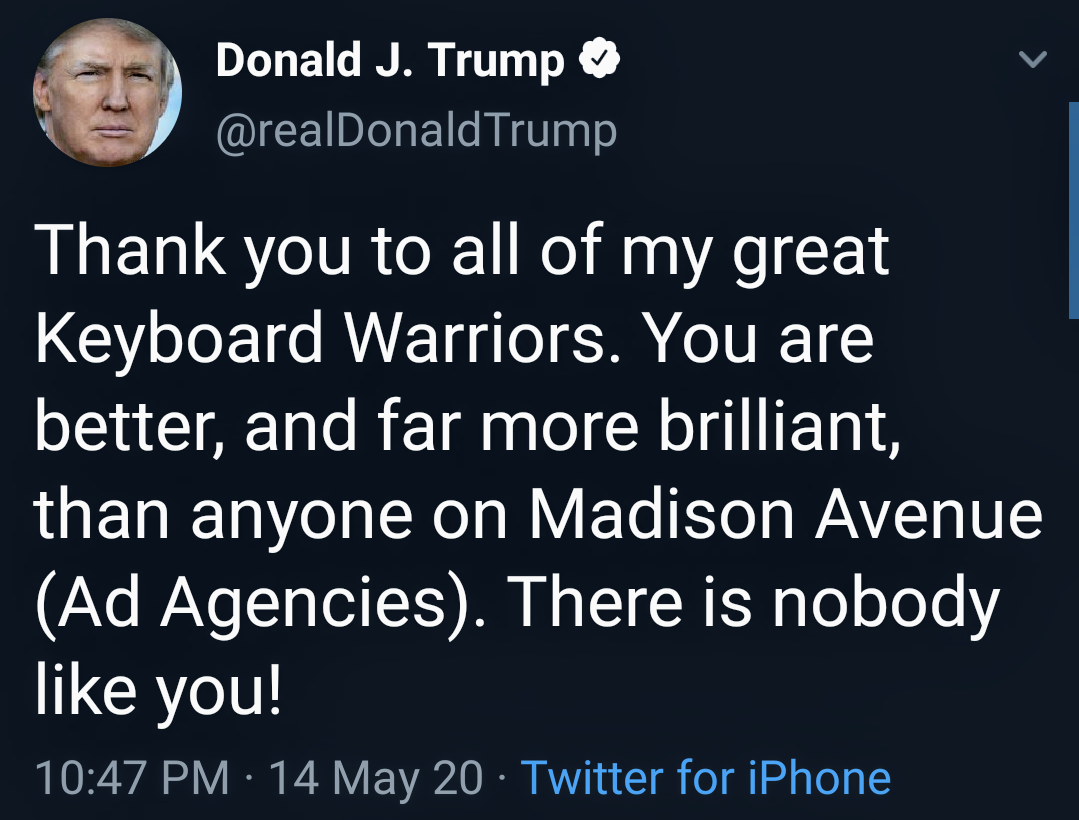 Madison Avenue was trending this morning, thanks to an assist from the Commander-in-Tweet. But not in the good way.

“Thank you to all my great Keyboard Warriors,” @realDonaldTrump’s account tweeted late Thursday night, adding: “You are better, and far more brilliant, than anyone on Madison Avenue (Ad Agencies). There is nobody like you!”

Never mind that the term keyboard warriors is deemed a derogatory reference to militant online trolls who are cowards in real life, but the comparison to ad industry pros is perplexing, especially given that there reportedly has been friction between the President and his campaign manager, Brad Parscale, who co-founded San Antonio-based agency Giles-Parscale Inc., before taking center stage in the Trump Pence 2020 campaign.

Or it could be a slam against the Lincoln Project operatives who crafted the devastating “Mourning In America” ad that infuriated the incumbent by highlighting his failures in combatting the COVID-19 pandemic, and for the economic disaster it has perpetuated on America.

Whatever is motivating his belittling of “Madison Avenue,” the President’s promotion of keyboard warriors is also telling, given that many of his Twitter followers are actually militarized bots and trolls activated as part of the Kremlin’s hybrid warfare attacks on American democracy.

Russia’s Internet Research Agency weaponized an army of fake @realDonaldTrump followers pre- and post- the 2016 election, and some analysts estimate that more than half of his followers are fake accounts spreading disinformation and/or fabricated support for the President.

Even more insidiously, some of the threads branched into a far more nefarious discussions surrounding fringe radical conspiracy group QAnon.

Or it could just be that warring is on the President's mind. He's been using the term "warrior" incessantly to refer to 1) the American people, 2) frontline healthcare workers and first responders, 3) his Republican party allies, and now 4) keyboard bots and trolls.

Since becoming President, he has tweeted the term "warriors" 30 times on Twitter.