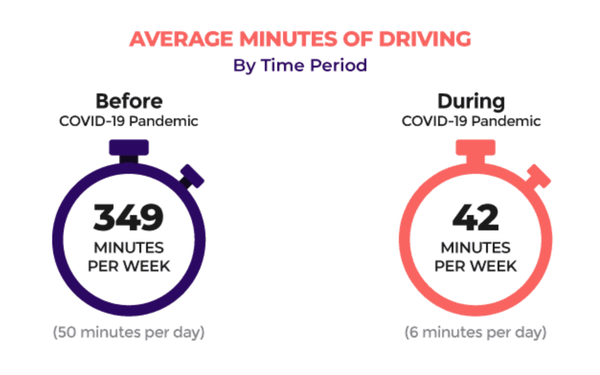 As businesses begin to reopen in some parts of the country, drivers might have a better attitude about rush hour after being stuck at home for several months.

A study by CarInsurance.org of 1,032 licensed drivers found a little less than half of the respondents actually miss their commutes.

Before the pandemic, driving claimed an enormous percentage of Americans’ time. On average, respondents spent nearly six hours every week behind the wheel of a car Since the shutdowns began, drivers have been on the road for just a quick six minutes each day, on average. Another 27% of respondents stopped driving their cars altogether.

For the 73% who chose to continue driving during the pandemic from time to time, their new normal looked nothing like the past. More than half of drivers said that when they did drive, they just got in their cars and drove around aimlessly, according to Carinsurance.org.

Forty-two percent said they took a loop around the neighborhood as part of their new normal, while 40% were still able to go to parks, despite the fact that many were closed.

Along with a reduction in driving comes less gas usage. According to the full-time employees surveyed, their pre-COVID commutes cost them $124 in gas each month. After COVID, it was just $27. That means that the lack of a commute during COVID-19 saved people $97 a month on gas costs alone.

But time was perhaps the biggest gain of all. In terms of commuting, full-time employees saved 19.6 hours every month.

Car buying, like car driving, also took a serious hit during the outbreak. Of the 39% of respondents who were actively planning to buy or lease a car between March and May 2020, 71% had decided to wait until later to do so.

After the pandemic ends, 29% said they would be less likely to lease or buy a car than they would have before. Another 24% said they were more likely.  Respondents said it would likely take them an average of 5.4 months from April 2020, or until October, to be ready to make their next car purchase or lease, per Carinsurance.org.