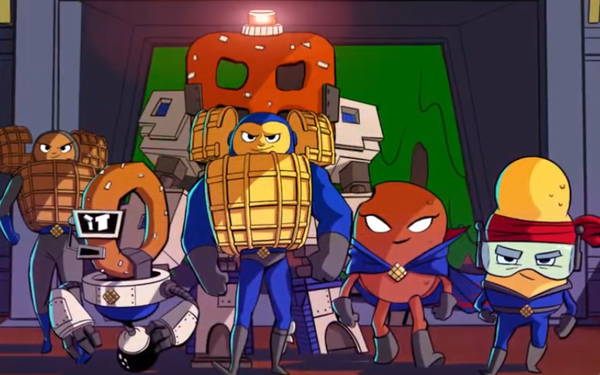 Some video games just never die. Improbably, that includes the one that came for free on CD-ROMs discs packed into boxes of Chex cereals all the way back in 1996.

When Chex gave away 30 million of those CD-ROMs nearly a quarter century ago, it was the first time a video game was ever offered as a cereal box giveaway. (It also came with 50 free hours of America Online.)

Quest, which is essentially a nonviolent version of the mega-hit Doom, won an award for promotional achievement and greatly increased cereal sales, but the promotion itself came and went in just six weeks.

Fans evidently were standing by for more.  A Reddit chat room post from 2016 reads, “it'd be sooooo awesome if they did a remake of Chex Quest. . . . I suppose it's just a fool's dream though.”

General Mills says that since the original Quest, “a community of volunteers” worked together to make updates and develop new versions. Quest 2 and 3 were released over the years, offered on the Chex website.

For this remake, which is sure to get wider play on the Steam platform, the company worked with the original game designer, composer and ad director and game maker Flight School.

One of the big differences is that now Quest has multiplayer capabilities. The other is the addition of Chex Mix heroes includingFred Chexter (Corn Chex), Dr. O Ryen (Rye Chip), and Shane ‘The Dread’ McBread (Breadstick).  In the original version, the only hero was a Chex cereal square.

Players will access those characters through unique codes found on specially marked bags of Chex Mix packaging or via Chex Mix Instagram or at ChexQuest.com.

But the Quest itself sounds just as funny. “The Flemoid menace is back and it’s up to the Chex Mix Squadron to save the galaxy,” says the promo on the website. “Head to planet Bazoik and zorch your way through hordes of Flemoids. Or battle your friends in the action-packed new multiplayer mode. Honor, glory, and snacks await.”

“Chex Quest games are fun for me to circle back to and dabble in as hobby,” says Chuck Jacobi, the original designer who helped make the new one.  “I have always enjoyed the silly world of Chex Quest and I hope fans of the original game will feel a sense of nostalgia with this new edition.”

General Mills is into it, too. “We’ve tapped into a lot of historically important people from the ‘80s and ‘90s to participate,” said Alex Colvin, General Mills senior manager, brand experience. “We have voices from the original Ninja Turtles cartoon and artists who worked on Mega Man and Tetris”--  two popular video games that also first appeared decades ago.

Twitter is loading up with comments from players spreading the news, with a fair amount of fondness, especially given that social site’s customary snark. “Holy hell, I’m 12 years old again,” tweeted one woman. Another wrote, "Ladies, gentlemen, and smizmars: I bring a message of hope...CHEXMAN IS BACK!”