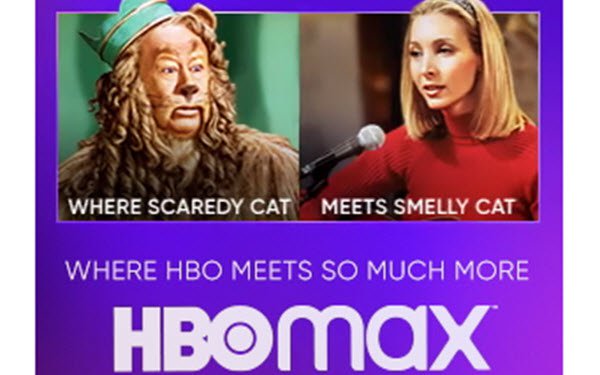 In the countdown to tomorrow’s HBO Max launch, one of the industry’s favorite games has become speculating about how many consumers know about the launch, and of those who do, how many are thoroughly confused about it.

The speculation is understandable. After all, AT&T has made HBO Max the lynchpin of WarnerMedia’s future, and has committed to spending some $4 billion on the new streaming service over the next three years.

So it’s not hard to imagine that a new survey from Morning Consult and The Hollywood Reporter might add to WarnerMedia executives’ opening-day jitters.

While a quarter (24%) correctly chose “Game of Thrones,” that’s actually worrisome, given that series’ incredibly high awareness level and its inextricable association with HBO.

Furthermore, just 13% knew that “Friends” reruns — long a staple on Netflix — are now moving to HBO Max, and just 12% knew that the library of episodes of the just-ended series “The Big Bang Theory” will be on the service. WarnerMedia reportedly spent $900 million to secure rights to those series for HBO Max.

In addition, just 12% of respondents knew that DC Extended Universe movies like “Wonder Woman” and Acquaman” will be on HBO Max, and just 8% knew that “Sesame Street” will be on it.

In addition, while WarnerMedia has been promoting HBO Max with ads featuring clips from its various entertainment brands, when asked whether content from these various brands would make them more or less likely to subscribe to HBO Max, 34% said HBO content would make them more likely, but another 31% said “no more nor less likely,” while 20% said “don’t know/no opinion,” and 15% said “less likely.”

Warner Bros. was the runner-up, with 32% saying that content would make them more likely to subscribe -- but even there, 33% said it wouldn’t influence them either way.

For all of the rest of the content brands — including Warner Bros., Cartoon Network, DC Comics, Turner Classic Movies, TNT, TBS and CNN — larger percentages of respondents said that the content wouldn’t influence an HBO Max subscription decision either way than said that it would make them more likely to subscribe. 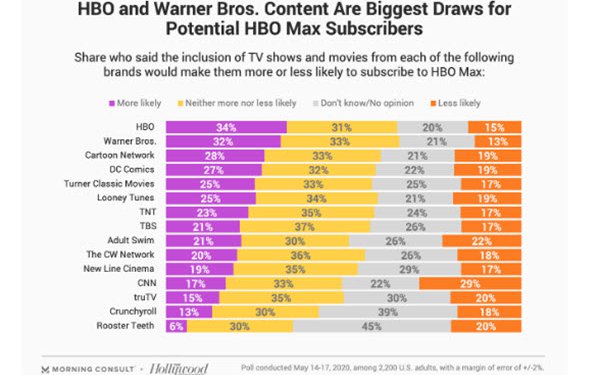 Meanwhile, 95% and 91%, respectively, were able to correctly indicate that Walt Disney’s “The Mandalorian” and Netflix’s “Stranger Things” will not be on HBO Max.

But some may be confused by HBO Max’s featuring -- at least at launch -- some licensed content from Disney and Netflix.

There is the much-debated price issue: At $15 per month, it’s the same as regular HBO (and for most HBO subscribers, there’s no cost to upgrade to Max), but it’s more expensive than any of the major existing competitive streaming services.

AT&T is “expecting Seth and Sally Streamer to grasp that (1) HBO Max is yet another way to get HBO (plus some other stuff), that (2) if you already have HBO, in most cases, you don’t have to pay another penny for HBO Max, and that (3) there is no reason to sign up for HBO Now in a world where HBO Max exists — though if you do sign up for HBO Now, you’ll be able to stream HBO Max, too,” Vulture’s Josef Adalian noted last week.”As AT&T looks to attract new subscribers, having so many offerings available could result in some consumers throwing up their hands in dismay and picking a more distinctive offering, like the Disney bundle.

“On top of all that, a big chunk of TV consumers won’t be getting it right out of the gate: AT&T still hasn’t reached a deal with Comcast (the country’s biggest cable company), Roku, or Amazon’s Fire TV platform. Unless something happens in the next week, there will be many HBO customers unable to access Max at all — adding yet another layer of confusion to the platform’s rollout.”

On the other hand, HBO Max not only has the built-in HBO audience to try it and spread the buzz; it also has an impressive lineup of high-reach distribution partners, including Apple TV+, Charter Communications, Hulu, YouTube TV, Google, Altice USA, Cox Communications, Microsoft Xbox, Samsung, Sony PlayStation, Verizon and the National Cable Television Cooperative.

And those are in addition to AT&T’s own platforms — DirecTV, U-verse, AT&T TV Now — which alone already have about 10 million HBO subscribers who will be upgraded to HBO Max at no additional charge.

In total, HBO and HBO Go had an estimated 43 million U.S. subscribers as of December 2019, according to Statista. (Globally, the brand has 140 million subscribers.)

Given that large, existing base of subscribers to try out and spread the word about HBO Max, the marketing and partner resources of AT&T and WarnerMedia, and—most important of all, HBO’s worldwide brand familiarity and reputation for quality content — I don’t really think we need worry too much about whether HBO Max can reach its goals of 50 million U.S. subscribers and 80 million global subscribers by 2025.

We’re not talking Quibi here. HBO Max is riding on the shoulders of a giant entertainment brand.