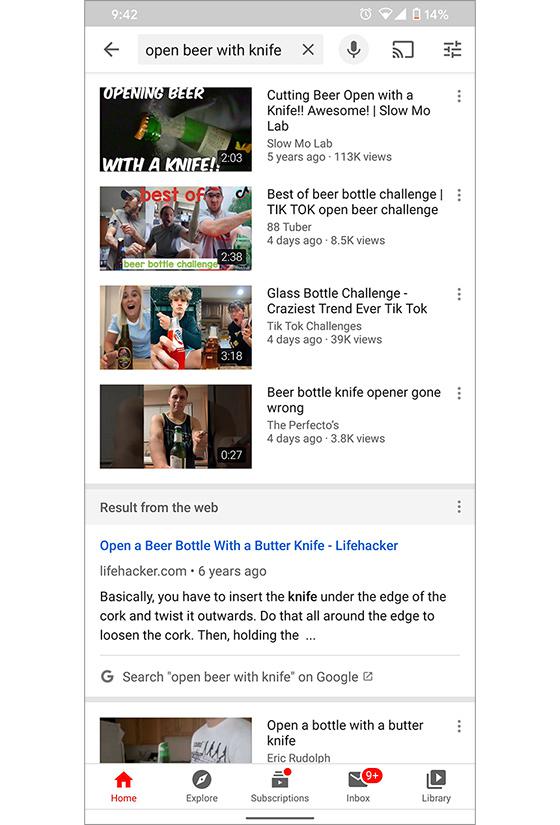 Google reportedly began testing a new feature that serves search results from the web within the YouTube app.

The feature was spotted by Reddit user TheMrIggs and reported by XDA Developers when searching on the phrase “open beer with knife” in the YouTube app.

It almost seems that Google wants those searching to find the information they are looking for on the engine rather than on YouTube.

It's interesting that the results list related videos, followed by a new “Results from the web” card featuring a recommended result from Google Search for the same query.

The comments show mixed reviews. Few said they support the new feature.nSome, such as TheMrIggs, are not fans of the feature, while others think the contextual information could be useful if it is done right.

“I don't like this,” commented a user called moonflower. “If [I] were searching for videos in the Google app, this would be reasonable. I don't need search results when I'm looking for videos in a video app.”

Others such as HCrikki called the feature a “cloud equivalent of leveraging a monopoly into a new one. Same with the Google Meet rollout within Gmail. Google recently began allowing Gmail users to access Google Meet, the video chat tool, within the email application.

Qwerty12qwerty wrote that “Yeah a week later I don't want to see an ad for how to perform the Heimlich maneuver.”

Some 70 comments into the post, someone wrote that if they wanted to use Google they would search on the engine and not on YouTube. The idea of searching on YouTube for information someone could find on Google baffled many.