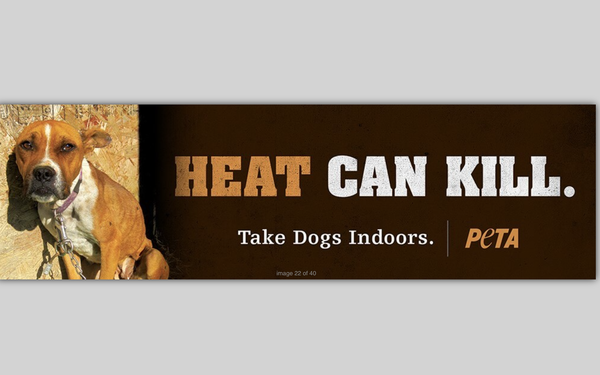 PETA bought stock in Lamar in March in order to push it to overturn the policy. Lamar has more than 325,000 displays across the country.

Despite having had a previously positive relationship with PETA, the animal rights group alleges that Lamar “blacklisted” PETA messages in 2017 in a move to appease SeaWorld, which objected to a provocative PETA billboard calling for the release of the orca Tilikum. Tilikum, who has since died, was also the killer whale at the center of the 2013 documentary "Blackfish."

Since then, PETA claims it has repeatedly offered to work with Lamar to meet any guidelines, but the company's corporate policy has been to refuse all PETA ads about any animal welfare issue.

"By refusing our ads across the board, Lamar is denying the public vital information and stifling crucial conversations at the expense of animal welfare," says PETA Executive Vice President Tracy Reiman in a release.

Buster Kantrow, vice president of business development for Lamar, told the Greater Baton Rouge Business Report the company’s policy with PETA has nothing to do with its position on the organization’s tactics and the copy PETA wanted to display on the billboard ad in 2017. According to Kantrow, the ad PETA wanted to run against SeaWorld included the name of the company’s CEO.

Lamar has since declined to run PETA billboards blasting the Bandera Ham Rodeo in Texas and Texas A&M University's muscular dystrophy experiments on dogs as well as an ad showing Oscar winner and PETA 2019 "Person of the Year," Joaquin Phoenix, appearing with a chicken and the words "We Are All Animals. End Speciesism."