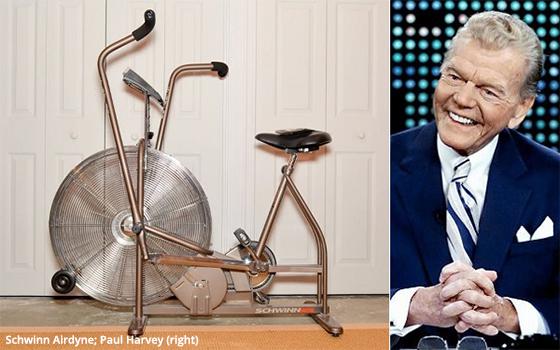 If the news portion of our radio and TV newscasts is all bad news, then where might we find some good news?

More than 30 years ago, Paul Harvey had an answer to that. To him, the “good news” in the self-styled newscasts he wrote and broadcast every day on the ABC Radio Network -- “Paul Harvey News” -- was not to be found in the newscast itself.

Instead, the good news about America was found in the commercials that ran during the show. It was his belief that advertising was the good news everybody is always saying they want, but never realize it is right there in front of their own eyes.

Memories of Paul Harvey and his take on the age-old complaint that the news is always bad come to mind because many people today are reviving the bad-news complaint about our own present-day news media.

Friends, family members, business associates and casual acquaintances are all saying the same thing -- that they have vowed recently to cut down or possibly even eliminate the news from their daily media diet.

It is all bad, they say. Or more to the point, it is all bad news about the COVID-19 pandemic -- the chaos, the consequences, the general confusion. When will it end? When will things open up? What will life be like?

The creeping consensus seems to be that no one has consistent, authoritative answers to these questions -- not our government officials and certainly not our TV reporters, our news channel talk-show hosts, or their clueless commentators.

Trusting any of the cross-talking voices in the COVID cacophony is nearly impossible, not least because news today is so biased and partisan. Everyone has their own agenda. No one meets in the middle, where one might assume the truth resides.

Instead, MSNBC and CNN on one side, and Fox News Channel on the other side offer you versions of the world we are now living in that are so starkly different that they might as well be on different planets.

It is easy to become frustrated by the abundance of noise and the scarcity of real, useful information.

This situation might concern younger people more than older ones, however. With aging comes perspective, and it is no less true when observing the news business.

Older people know better than younger ones that frustration over the daily avalanche of bad news is not a new phenomenon.

I heard Paul Harvey give his good-news/bad-news take on the news in a keynote speech he delivered more than 30 years ago at one of the radio and TV industry trade shows I used to cover in the 1980s.

I apparently found his point-of-view intriguing enough to actually remember it, and to think about it from time to time.

I even remember him specifically citing the commercials for the Schwinn Airdyne stationary exercise bike (pictured above) that aired during his newscasts as Exhibit A in his advertising-as-good-news thesis.

Schwinn was a loyal, long-time sponsor of Harvey’s radio shows and he swore by them. He was a broadcaster of the old school who voiced the commercials for Schwinn and other sponsors himself.

To him, the “good news” in the Airdyne commercials was this: That we have the great fortune to live in an era and in a country in which just about any average American can have access to great products such as this sturdy, handsome stationary exercise bike, which Harvey himself claimed to use every day.

But the Schwinn Airdyne spots were just one example of the great, good news he felt was inherent in all of our radio and TV commercials. What an abundance of incredible products, he said -- automobiles, healthcare products, food and beverages of every description, and the list goes on and on.

Our electronic media today are full of bad news. Are commercials the antidote? Paul Harvey thought so. And that’s the rest of the story.