On 'American Masters': The Glory That Was Mae West 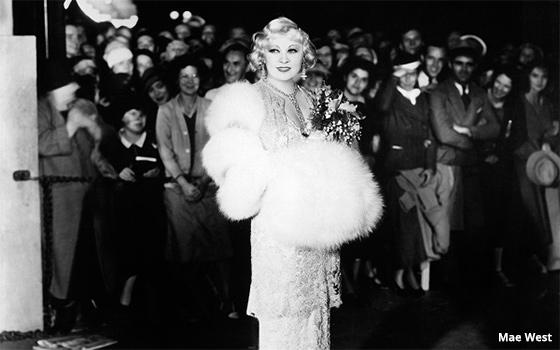 In a new “American Masters” biography of Mae West, the point is made that she was censored in virtually every form of 20th-century entertainment.

On the Broadway stage, she was convicted of obscenity in the 1920s and served eight days in jail. In Hollywood, her scripts were subjected to severe editing by the Production Code Administration of the 1930s.

On the radio, she was banned from NBC following a bawdy appearance on Edgar Bergen’s radio show. And on television, she appeared on an episode of the CBS interview show “Person To Person” that was subsequently never aired because of what she said.

And these stories are only the tip of the iceberg in a life story that lasted 87 years -- 1893-1980. If the point of this new, 90-minute episode of “American Masters” is that Mae West was a one-of-a-kind, American original, then the point is well made. “And how!” Mae herself might have said.

Subtitled “Mae West: Dirty Blonde,” this documentary is a wall-to-wall pleasure. She grew up in the tail-end of 19th-century Brooklyn, the daughter of a one-time prizefighter and a mother who was a corset model.

The world of her childhood is well-described in very old film footage, still photos and the testimony of historians. She first performed on stage at age 8.

While still a child, her mother took her to the wide variety of live performances that were available in Brooklyn in those days, including burlesque.

The documentary implies that Mae West grew up in surroundings that toughened her. She came out of Brooklyn fiercely independent, whip-smart and brave.

She appears to have had a gift for knowing which way the cultural winds were blowing because whenever she courted controversy or otherwise pushed the envelope in the contents of her stage plays and movies, her career advanced and thrived.

Through modern-day eyes, Mae West was a pioneer for the advancement of women, homosexuals and black Americans. The cases for all three are convincingly made in this stellar documentary.

In the film, it is noted that in her notorious Broadway plays (which she wrote herself, and starred in) and her most famous movies (‘She Done Him Wrong” and “I’m No Angel,” both from 1933), the characters she played stood traditional gender roles on their head.

The typical Mae West character was brash, single and brazenly available. While the character was a woman, her attitude toward the opposite sex was more like the men of her time.

Like them and the way they regarded women, she felt she could have her pick of the men who surrounded her, discard the ones she didn’t like, and when she was done, casually move on to someone else.

Her first bosses in Hollywood, where she landed at Paramount, thought women would not flock to her movies. Mae thought differently, and she was right. In fact, the film suggests women bought more tickets to Mae West movies than men did.

She was nothing if not canny. Among her many achievements, detailed in the documentary, was her discovery of Cary Grant.

In 1933, Grant was used by Paramount only in screen tests for other actors. But she saw him on the lot one day and based solely on his looks, she insisted he be cast in her first Paramount picture, “She Done Him Wrong.” Mae West was right again.