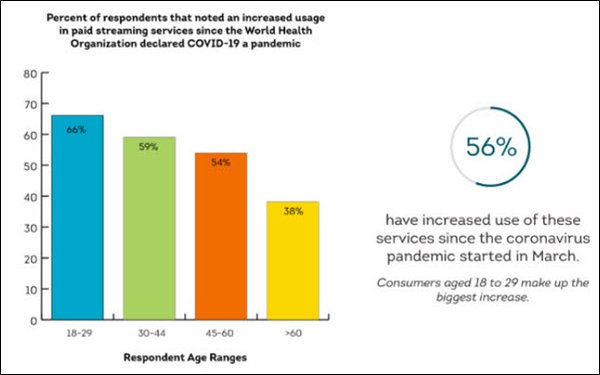 A new survey from TransUnion finds 56% of U.S. adults saying they’ve increased their use of paid streaming services since the pandemic started in March, and 45% saying that they’ll make paid services "a permanent part of their lives” going forward.

The online survey of 2,639 consumers, statistically representative of the 18-and-older U.S. population, was conducted during the week of May 18 and has a +/- 3% margin of error.

That last finding seems to contrast rather starkly with a recent Magid survey of a somewhat narrower population, U.S. sports viewers 18 to 64, which found those viewers saying they’re likely to return to less intense, pre-COVID streaming habits once live sports programming becomes available again on traditional TV as well as other platforms.

Overall, TransUnion found 92% of U.S. adults saying that they now subscribe to at least one paid television or audio streaming service.

And nearly half (48%) report subscribing to three to five services now, up from 37% prior to the pandemic.

On average, respondents report that their paid streaming services usage has increased from one to two hours per day before the pandemic to three to four hours as of May. Not surprisingly, increased streaming is most pronounced among younger segments (chart above). But a third of all respondents report spending at least five hours daily with streamed media.

Half (53%) of respondents overall now report using a subscription streaming service in place of a traditional cable TV package, but that proportion rises to 65% among those 18 to 29 and 63% among those 30 to 44. Among those 45 to 60 and 60-plus, 46% and 34% use streaming instead of cable TV. The results don't indicate whether these respondents are cord cutters or cord nevers.

On the flip side, just 35% to 37% of the two younger segments have both content streaming services and cable TV packages, while 54% and 66% of the two older segments now have both.

Smart TV is the most popular streaming device overall, with 37% using this platform. But a quarter of those 18 to 29 prefer mobile devices for streaming, and 19% of those 30 to 44 prefer OTT devices.

Those 60 and up show the highest preference for smart TVs (41%), with computers being their second choice — but fully 19% said they don’t stream at all.