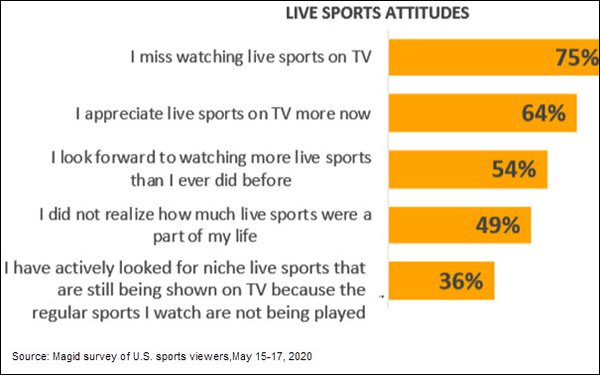 The live sports blackout has affected media and device use behaviors even more than the general sheltering at home required by the COVID-19 pandemic — at least among sports viewers.

As a result, spikes in streaming and other behaviors among much of the population are expected to reverse when live sports return.

So reports Magid, based on a survey of sports viewers ages 18 to 64, matched to census for age, gender and race, fielded between May 15 and May 17.

“The increase in SVOD viewing, as well as gaming and social media usage among sports viewers, can be attributed to the lack of live sports, not COVID-19” quarantine per se, according to the report. Therefore, the return of live sports will likely eat into those behaviors, as indicated by the survey results:

The researchers report a “sense of urgency” for the return of live sports (see attitude chart at top of article). And fully 89% of sports viewers say they will watch live sports on TV even if games restart with no fans in stadiums.

And given that the content that sports viewers have been watching in place of live sports is “running out,” and that it will take a long time for studios to replenish libraries with new content, live sports’ role in the pay-TV bundle will be more critical than ever over the next year, they say.

While consumers have always valued live sports, they have always been able to take watching them for granted. Now, pent-up demand from the blackout has made consumers (and marketers) realize that sports viewing is a “massive part” of people’s lives. Sports viewers “desperately miss sports on TV,” notes the report.

Among all respondents, 37% indicate that when live sports return, they plan to watch more of that programming than they did prior to the crisis — a net change of +21%.

The expectation of viewing more sports is even more pronounced among those under 40, and those who use vMVPD services. 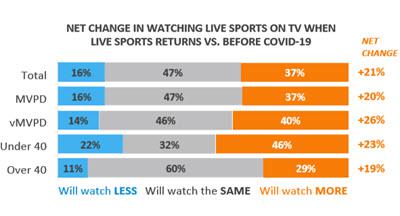 The survey also confirms that live sports are propping up the pay-TV bundle, as the dominant reason people pay for such services.

Two-thirds of MVPD subscriptions and 71% of vMVPD subscribers cited live sports as the top content category reason for paying for TV services in this current survey.

“Distributors will need to prioritize live sports to sustain their businesses in the face of cord cutting and switching,” write the researchers. “Networks that focus on programming like reality, home, travel, and kids could be sacrificed long before those that focus on sports.”

Indeed, 39% of respondents said that they are likely to switch providers if their current providers don’t offer live sports when that programming becomes available again, and 64% said they would “consider” switching for that reason.

Among those under 40, 45% are likely to switch if their current provider doesn’t carry sport networks, and 74% would consider switching.

Among those over 40, 34% say they’d be likely to switch, and 56% say they would consider switching.

In short, “not carrying live sports would be a major problem for MVPDs and vMVPDs,” Magid stresses.