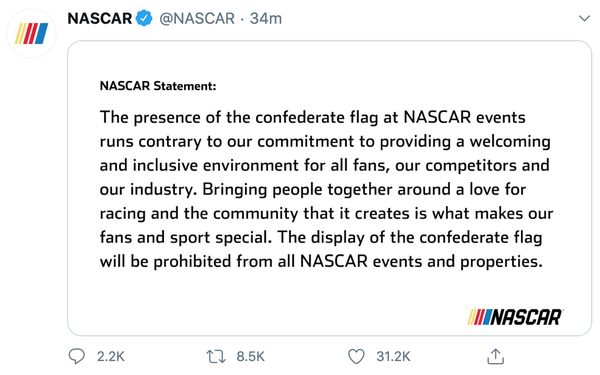 Presumably in reaction to complaints from fans and drivers -- including Bubba Wallace as a result of the many recent "Black Lives Matter" protests -- NASCAR took to its Twitter account Wednesday afternoon to announce the new policy.

"The presence of the Confederate flag at NASCAR events runs contrary to our commitment to provide a welcoming and inclusive environment for all fans, our competitors and our industry," NASCAR tweeted. "Bringing people together around a love for racing and the community that it creates is what make our fans and sport special. The display of the Confederate flag will be prohibited from all NASCAR events and properties."

In just over 30 minutes, the tweet had more than 31,000 "likes" which continued to rise. However several fans responded that they were angry and would quit supporting NASCAR or else continue to bring their Confederate flag to races despite the prohibition.

Meanwhile, NASCAR and Advance Auto Parts have entered into a multiyear agreement that designates the auto parts retailer as the title sponsor for the NASCAR Weekly Series and the sports’ “Official Auto Parts Retailer.”

The partnership will round out Advance’s investments in the sport, including past race entitlements and a current partnership with Team Penske driver Ryan Blaney.

"It's great to have Advance join us in welcoming the return of NASCAR-sanctioned grassroots racing," Kennedy says in a release. “Advance’s commitment to our Weekly Series will develop some of the brightest NASCAR talent across North America.”

The series is run at nearly 60 NASCAR-sanctioned Home Tracks throughout the United States and Canada. NASCAR Home Tracks are a group of local short tracks sanctioned by NASCAR.