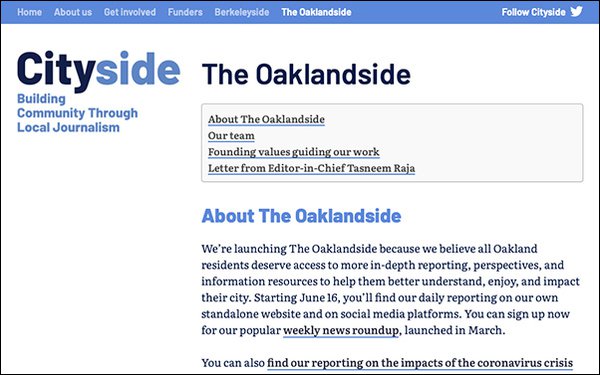 A news site aimed at serving Oakland, California's underserved communities launches today with the support of the Google News Initiative. The Oaklandside, helmed by EIC Tasneem Raja, joins a network of news sites, including independent news outlet Berkeleyside, through the nonprofit Cityside.

Raja has served as a senior editor at both NPR and Mother Jones.

“The Oaklandside, like Berkeleyside, aims to be additive rather than competitive within the local media ecosystem in which it operates, and will seek to respectfully partner with others that already serve the information needs of people and communities across Oakland,” Raja wrote in a blogpost announcing the project’s launch today.

With the mission of delivering “a nonprofit news outlet wholly dedicated to serving local information needs, amplifying community voices and investigating systems in and for Oakland,” The Oaklandside’s seven staffers will work to bring “informed perspectives, deep context, historical research and an equity lens to its coverage of police brutality and mass criminalization in Oakland and beyond” to Oakland residents.

The outlet launches during nationwide protests calling for an end to systemic racism and police brutality.

Raja and her team have worked since late summer 2019 to determine what the Oakland community wants most from a news outlet, creating in the process “a strong foundation of listening.”

“We heard a deep desire for more journalism that reflects the beauty and value Oakland residents see in their communities. Oaklanders also asked us to report on “systems,” not just “symptoms,” and to center the voices and expertise of people directly impacted by policy,” wrote Raja. “We also received countless messages about the importance of building a newsroom and a pool of contributors that reflect the diversity of the communities we aim to serve.”

As a result, the newsroom’s beats, hiring processes and its name have been decided based on feedback from hundreds of community members.

Raja noted the work of other Bay Area and U.S. civic journalism organizations, which include Oakland-based Spanish-language outlet El Timpano, Oakland Voices, Chicago’s City Bureau and Detroit’s Outlier Media, among others, guided the mission of The Oaklandside.

Like other participants in GNI’s Local Experiments Project, The Oaklandside received initial funding and technical and product advice. However, Google holds no influence over the site’s editorial work.