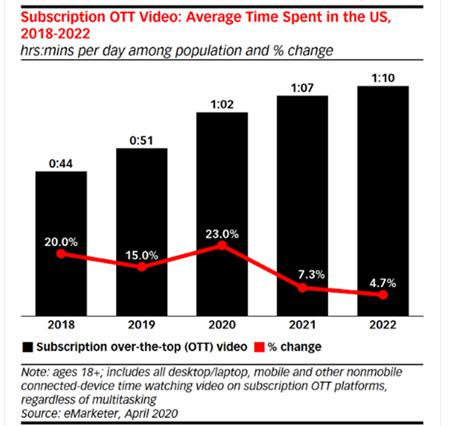 Due to the pandemic-driven shelter-at-home phenomenon and other factors, average time spent with subscription OTT video content among U.S. consumers is expected to rise by nearly a quarter (23%), and hit 62 minutes per day — surpassing one hour for the first time.

That’s the topline news from a new eMarketer analysis, which notes that time spent was already rising at a rapid rate. Last year, it rose 15% year-over-year.

A second contributor to the accelerated viewing time is more content. That includes the huge amount of additional premium content now available through the large libraries of new SVODs from major media companies including Disney, NBC and WarnerMedia, as well as original content from those streamers and others that are making large investments in it, such as Apple+ and Quibi.

Finally, there’s cord-cutting. As that accelerates, more video consumption is shifting to OTT.

And most — though not all — surveys have been pointing to the likelihood of increased cord cutting as a result of the suspension of live sports, the biggest driver of paying for traditional cable. A Business Insider Intelligence Coronavirus Consumer Survey, for example, found 9.2% of a sample representative of U.S. adults saying they had already cancelled or were planning to cancel their pay-TV subscriptions for this reason.

For a contrarian conclusion, not mentioned by eMarketer but covered in Digital News Daily recently, see the results of a Magid survey of U.S. sports viewers—that’s viewers, not necessarily fanatics—by Magid, which pointed to a deflation of accelerated streaming once live sports are back.

“Subscription streaming will remain the most popular way of consuming digital video for the foreseeable future,” summed up eMarketer Junior Analyst Blake Droesch, in summarizing the results.

But while there is room for incremental growth after 2022, “daily time spent with digital video will eventually approach a ceiling,” he added. “Any new-to-market subscription OTT services are unlikely to boost time spent. Instead, they'll have to edge out existing services for a piece of the pie.”