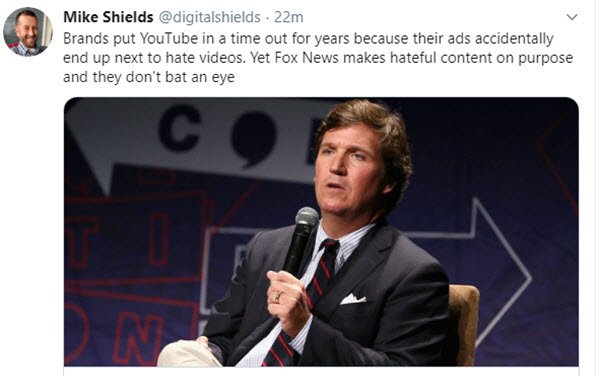 “If brands truly care about the Black community — whether we're talking about their employees or consumers — there's one bold but absolutely necessarily thing they must do. Defund Fox News. Pull all of your ads — now.”

That’s the call coming from Mike Shields, formerly an advertising editor for Business Insider, and reporter for MediaPost, in an opinion piece published in BI.

“Fox News executives simply moved the T-Mobile ads to different shows on the network and kept T-Mobile's cash — and used it to keep programming the network and paying Carlson,” he points out.

Shields maintains that the same criticism applies to Papa John’s and Disney.

“These presumably purpose-driven brands proved their true motivation — don't do anything unless there's a threat of bad PR. Then spin it to make yourself look good,” he asserts.

Among other comments, during his show on June 8, Carlson said: “This may be a lot of things, this moment we’re living through, but it is definitely not about black lives… Remember that when they come for you, and at this rate, they will.” Fox has since claimed that Carlson’s “they” reference was meant to allude to Democrats.