Samsung's Huge SoFi Stadium Videoboard In League Of Its Own 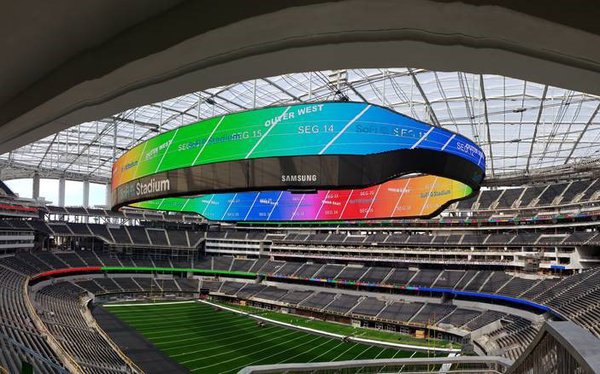 The philosophy behind most new stadium designs is: Make it big.

The new Samsung-designed videoboard at SoFi Stadium in Los Angeles took that concept and ran with it.

Last week the stadium unveiled its 70,000-square-foot, 2.2-million-pound state-of-the-art scoreboard that looms over the playing field where the Los Angeles Rams and Chargers will play this fall, coronavirus notwithstanding.

It is, in a word, ginormous.

The scoreboard, dubbed the Oculus, is 120 yards long -- longer than the football field itself --and one-and-a-half times wider. Its tallest panels are four stories tall. The shortest ones are half that size.

The videoboard boasts the largest LEDs content playback system ever used in a sports or entertainment venue, with 80 million pixels, and 260 JBL speakers with the wattage strength of 1,500 home theater systems, according to Samsung.

Why launch this now?

NFL team owners “need to make the experience feel special --  that includes making sure fans don't feel they are missing out on great TV coverage,” says Ken Kerschbaumer, co-executive director of the Sports Video Group, an industry trade association. And those boards become important to teams because they can sell space to sponsors, he notes. (Samsung itself gets a marketing boost on the bottom of the scoreboard.)

The cost of this sign hasn’t been disclosed, but a Rams official told CNBC last year that it’s three times as large as the NFL’s existing example of videoboard excess at the football home of the Dallas Cowboys. That cost $40 million in 2009.

“The Samsung LED technology represented in the videoboard at SoFi Stadium is unlike anything fans have ever experienced,” said Jason Gannon, the stadium’s managing director, in a statement that is no doubt correct because tech companies and stadium designers keep pushing the envelope. They realize that watching a game in person inevitably includes being awestruck by the visual aids.

The SoFi videoboard spectacle is in addition to huge videoboards just erected at the new Allegiant Stadium in Las Vegas, where the Oakland Raiders will move this season.

There, the news is outdoors, too. Stadium management will erect a videoboard that’s 80 feet tall by 345 feet long and is set to be attached to the outside of the $2 billion stadium. That will make it the largest freestanding sign in Las Vegas, where giant signage is just part of the cost of doing business.

Inside the stadium, there will be a 254-foot-long and 49-foot-high videoboard, and two 122-foot-long boards at the other end of the field. Also planned are two smaller boards -- and, for good measure, 2,200 TVs.

All of these in-stadium enhancements are coming in a season when whether fans will even be let into games is still a good question.

Kerschbaumer says, however, that fans or not, NFL teams want those giant videoboards.  “We are hearing that even if there are no fans in the stands for football games this fall, expect the video show to go on, so the coaches can know whether or not to challenge a play."