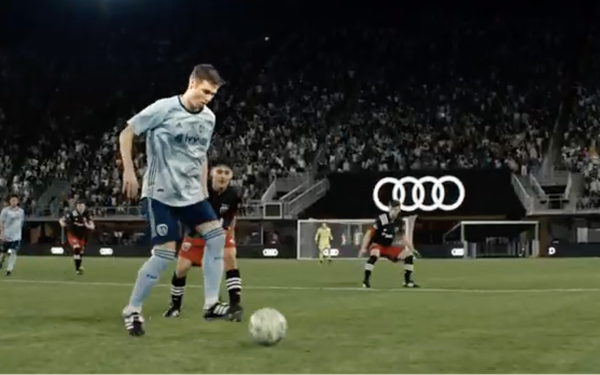 Audi provided $1 million last year and will donate up to $1 million this year to the league-wide initiative that aims to enhance both the on- and off-field development of MLS academy players.

Starting July 8, for every goal scored during the MLS is Back tournament and knockout round, Audi will contribute $1,000 to MLS academies. For the tournament final, Audi will donate $5,000 per goal.

The 60-second spot was shot on location at Washington’s Audi Field, home of D.C. United, and features four rising soccer stars from MLS academies. It will air in both English and Spanish during the opening match of the MLS is Back tournament.

The spot gives fans “a unique glimpse into the daily lives of these talented young athletes,” says Loren Angelo, vice president of marketing, Audi of America.

Creative shows the evolution of an MLS player’s career and the impact of the “Audi Goals Drive Progress” program.

The spot was a collaborative effort between Audi’s in-house creative team KreativWerk and MLS.

It will run on MLS partner networks (ESPN, FOX Sports, Univision, TSN, and TVA Sports), regional sports networks and across international broadcast partner platforms, as well as on the league’s own digital channels. The spot is being promoted on social with the #GoalsDriveProgress hashtag.

This season marks the sixth year of support from Audi of America as the official automotive partner for MLS.