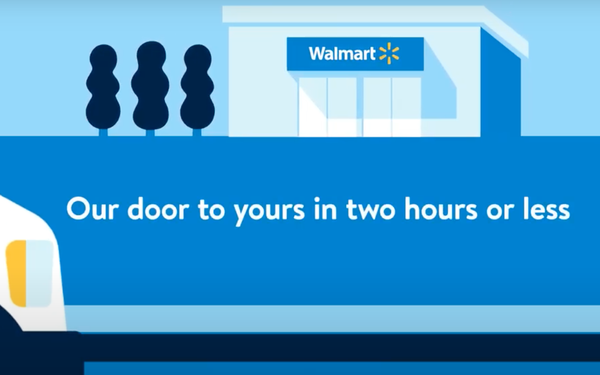 Walmart+, the long-rumored challenger to Amazon’s Prime service, is getting closer. Recode reports the service will launch this month, priced at $98 per year, cheaper than Amazon Prime’s $119 price tag.

Recode says Walmart+ will deliver many of the same perks as Amazon does with Prime, including same-day delivery of groceries and general merchandise. It’s also reporting the annual subscription will include discounts on gasoline and early access to promotional items.

Citing multiple sources, Recode says the Bentonville, Arkansas-based retailer had intended to launch the service early this spring but scrapped the plan due to the pandemic.

The report sparked a jump in Walmart’s stock price, as investors sized up its potential to muscle in on Amazon.

Walmart, which tells Marketing Daily it has no comment on Walmart+ at this time, already offers a $98 “Delivery Unlimited” option for groceries, but “this appears to represent a much-improved value proposition for consumers,” writes Rupesh Parikh, an analyst who follows Walmart for Oppenheimer & Co.

“We believe this could represent an attractive offering to combat any share shifts related to Amazon’s free grocery delivery offering," adds Parikh. "A July launch appears well-timed, given an increased consumer reluctance for brick-and-mortar shopping in the current backdrop.”

Some think consumers will jump at the chance to pursue Walmart’s everyday-low-price promise via a subscription model.

“Importantly, we think Walmart+ provides substantial value to both the customer and the company,” writes Paul Trussell, an analyst who follows Walmart for Deutsche Bank. “The majority of Americans are already subscribers to one or more of Walmart’s competitors such as Amazon Prime and Costco, as well as fulfillment services of Instacart and Shipt,” he says.

But Walmart’s  “growing online assortment, same-day capabilities, high market share in grocery and pharmacy categories, and overall convenience with 90% of U.S. households within 10 miles of a store provide a clear advantage,” adds Trussell.

While he expects a minority of core shoppers to join, since non-members already get Walmart’s low prices, he points out that subscription fees generate meaningful revenue for Walmart competitors. And he thinks Walmart+ can result in “increased loyalty and wallet share, especially from higher-end customers, and likely a heftier valuation.”

While Walmart’s e-clout has been growing fast, particularly during the COVID-19 crisis, it’s still tiny compared to Amazon's, with Recode reporting it is about one-eighth its size.

“Today, Amazon is valued at $1.5 trillion, while Walmart is worth $337 billion,” Recode reports. “And Amazon Prime is a big reason why.”