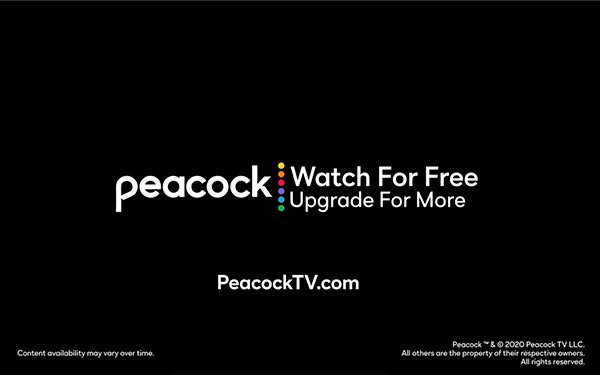 Ramping up to its launch today, NBCUniversal’s streaming service Peacock has placed virtually all national TV marketing on its owned networks over the last two months, amid video streaming competitors’ ramped-up advertising/promotional efforts.

Peacock had 6,469 commercial airings on 13 NBCUniversal-owned networks (and The Olympic Channel; where NBC has an equity stake) from May 13 through July 13 -- yielding 1.9 billion impressions, according to iSpot.tv.

Much of the commercial messaging is about NBCU’s basic advertising-supported Peacock option that consumers can get for free -- no subscription monthly price needed. NBC executives say Peacock will have a low five minutes of advertising per hour.

Peacock had intended to launch with high-profile on-air promos during NBC’s Summer 2020 Tokyo Olympics, which typically produces big ratings. That sporting event was postponed until next summer due to COVID-19.

Speaking on CNBC on Tuesday, Matt Strauss, chairman of Peacock and NBCU Digital Enterprises, said that while missing the Olympics was a disappointment, an early pre-launch on Comcast-owned cable systems helped it achieve some year-end goals much sooner.

“We beat those targets within sixty days," Strauss said, but did not elaborate, although he did say that in a couple of years he expects Peacock to get to 30 million to 35 million monthly active accounts.

While some major high-profile digital TV/video distribution deals are missing at launch -- such as Roku and Amazon Fire TV, which each have 40 million active monthly users -- Strauss says Peacock’s main premise for its basic option is its overall strong selling point:

“One of the benefits of Peacock is that it is not only free to consumers,” says Strauss. “It’s free to any platform that wants to distribute Peacock.”

The lone non-NBCU TV network that is getting some paid advertising time, according to iSpot.tv, is Comedy Central, with one commercial airing and an estimated spend of $8,866.

During this period, Peacock had to compete for share of voice in a busy and competitive video streaming category: Disney+, Amazon Prime Video, and Hulu earned more impressions than Peacock, according to iSpot.tv. Hulu, Disney+ and Amazon also aired more total messages during the period than Peacock.