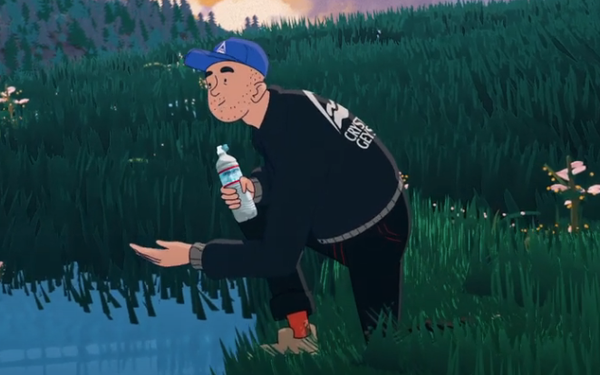 Crystal Geyser Alpine Spring Water and Domino’s Pizza are promoting their use of sustainable packaging to encourage people to recycle more plastic bottles and cardboard.

Launched today, Crystal Geyer’s new “Simple…But Not Easy” campaign comes as more CPG marketers are investing in rPET bottles, which are made from previously used plastics.

The campaign consists of a series of animated films highlighting the 30-year-old company’s commitments to nature conservation and sustainability.

A 60-second spot shows animated characters touring mountains, forests and streams as a voiceover explains how Crystal Geyer water is bottled at its source. A figure representing a company employee says “Simple,” before the voiceover explains, “Even though it’s not easy.”

The ad will air on CNN, Comedy Central, Food Network, Bravo, National Geographic, along with local news broadcasts in markets that include Los Angeles, San Francisco, Seattle, Portland and Phoenix.

rPET stands for recycled polyethylene terephthalate, which resembles traditional PET plastic but is made from previously used plastics that have been collected, sorted and cleaned.

Crystal Geyser parent CG Roxane recently opened a processing plant in California “with the capability of producing 35 million pounds of rPET per year, which is nearly a billion plastic water bottles,” quality control manager Kemi Oba said in a statement.

Zephyrhills will be launching limited-edition labels that minimize the brand name while encouraging consumers to recycle with a message stating, “I'm Not Trash! I'm 100% Recyclable.”

Nestle said the initiative will mean that nearly 60% of all households in the U.S. will have access to one of its regionally distributed spring water brands in bottles made entirely with recycled plastic.

Turning to cardboard, Domino’s Pizza today announced it has launched the website recycling.dominos.com—in conjunction with its primary box supplier, WestRock—to educate customers about the importance of recycling pizza boxes.

Domino’s noted that its boxes contain 72% recycled content and that “Contrary to popular belief, pizza boxes are recyclable, even if they have some grease on them.”