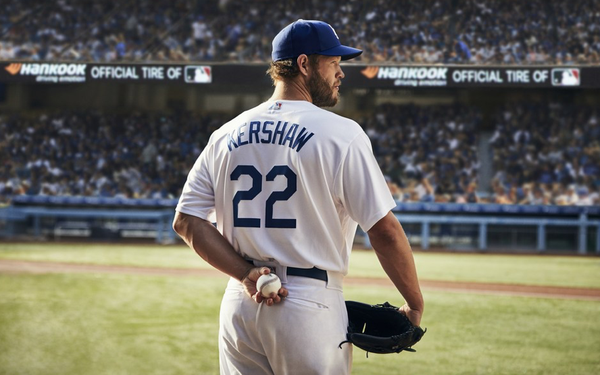 Two TV spots will air on ESPN, FOX and MLB Network. Print and digital featuring Kershaw are also in the works. The campaign is the tire company's first effort dedicated solely to the U.S. market since the announcement of the MLB partnership in 2018.

“Long Catch” shows Kershaw pitching and then speedily taking off from the stadium in a car equipped with Hankook performance tires.  After a brief jaunt, he squeals the car to a stop and jumps out and catches the ball that presumably had been hit out of the park.

“Perfect Pitch” intersperses images of Kershaw trying to decide which type of pitch to throw with footage of sports cars engaging in similar moves (the slider, the changeup and the curveball.)

Both 30-second spots were created by Innocean and end with the tagline “Never Halfway,” which the company began using in 2015.

"Both commercials show our passion for adventure and a commitment to quality, which also aligns with MLB's philosophy,” says Sooil Lee, president of Hankook Tire America, in a release.