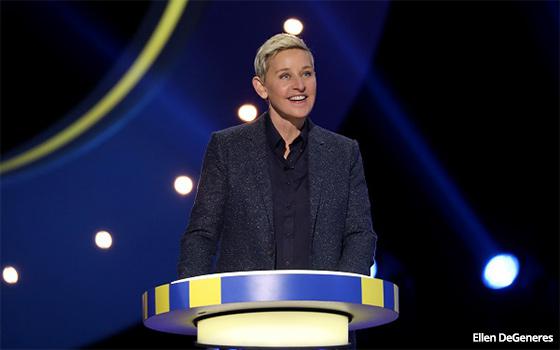 By the time you read this, “The Ellen DeGeneres Show” could be no more.

Conflicting stories appeared over the weekend. Late Friday, DeGeneres herself was reportedly seeking to quit the show in the wake of several weeks of negative stories about her conduct behind the scenes, plus stories of rampant sexual harassment and misconduct involving the show's producers.

A day later, on Saturday, the story reversed itself. Now, producers were quoted in the entertainment trade press insisting that Ellen intends to continue with the show. They said the stories about Ellen seeking a way to exit the show were false.

Then, still another story on Sunday reported that James Corden, currently host of “The Late Late Show” on CBS, is “in line” to replace Ellen on the syndicated daytime show, which would obviously have to be renamed.

Even if the end did not officially come over the weekend, it is hard to envision a scenario in which the show survives the turmoil swirling around it.

The avalanche of stories that have erupted recently depict DeGeneres, 62, as aloof at best and, at worst, abusive of underlings. Moreover, she stands accused of turning a blind eye to sexual-harassment behavior that was known or obvious to rank-and-file staffers at her show.

The depiction of Ellen as a holy terror stands in stark contrast to her public image.

Her long, successful career -- first in stand-up comedy and then as the host of her syndicated talk show (officially titled “The Ellen DeGeneres Show” but also known simply as “Ellen”) -- has been based in large measure on her broad appeal. The average person finds her likable and inoffensive.

To be clear, Ellen herself is not the subject of the sex harassment stories that have exploded lately in the entertainment news media.

Those stories comprise one of two seemingly separate categories of issues that are threatening the show.

Allegations that the production's workplace is a toxic hotbed of sexual come-ons, innuendos and inappropriate touching (to say the least) do not seem to involve Ellen herself.

Instead, these stories are centered on high-ranking members of her show’s production staff. The sheer number of the stories and the details they contain have reportedly led to a company investigation of the “Ellen” show, which is distributed by Warner Bros. Domestic Television Distribution.

While the other category of negative stories coming out of the show does not appear to be sexual in nature, it is troubling for other reasons.

These stories are about Ellen herself. In story after story, it is alleged that she is distant and uncommunicative with all but a few of the people who work on her show. Some of the stories accuse her of being openly mean to staffers.

One story actually accused her of deliberately setting out each day to single out a staffer who she would then berate or otherwise treat terribly for the entire day.

This particular story illustrates the pitfalls of these kinds of negative-story torrents. Some of the stories may, in fact, be true. But others, such as this one, are much less believable.

Another subcategory of stories has Ellen's publicity team making absurd demands of interviewers -- demands that they insist come from Ellen herself.

One of these stories had to do with an appearance she made on an Australian morning show.

According to the story, which seems to have come from her would-be interviewer, he was instructed before the interview that he must never look directly at Ellen during the interview or -- what? -- he would turn to stone?

Where the sex harassment charges are concerned, part of the investigation will no doubt be aimed at determining whether Ellen herself knew that this behavior was running rampant on her show.

As for the stories of eccentric demands made on her behalf, it is certainly possible that Ellen has developed some idiosyncrasies over the years, although banning interviewers from looking at her is probably not one of them.

Idiosyncrasies are not exactly unheard-of in the world of celebrities, especially among those who have been in the celebrity spotlight as long as Ellen DeGeneres has.

But when you add up the stories of sexual misconduct among her producers and unusual demands made by her publicists -- demands that may originate with Ellen herself -- it is hard to see how her show can continue.