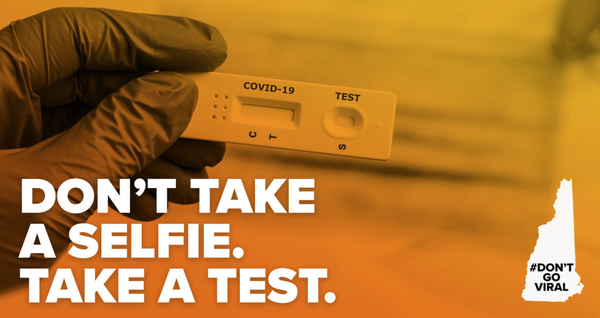 The state of New Hampshire is hoping to inspire safe behavior among residents via a social campaign.

The goal of the effort from GYK Antler is to encourage 18- to 40-year-olds to wear masks and social distance.

To resonate with the target audience, campaign creative has an interpersonal peer-to-peer tone instead of the feel of a directive from the government, and also taps into the way users communicate on social media platforms (using graphics, icons and memes).

It features a series of catchy headlines paired with direct messaging about the importance of following safety protocols. The graphics are specific to each interface, with text like, “This is the one time you don’t want to go viral” for Instagram and “Your moves are sick, wear a mask” for TikTok.

The media strategy leans heavily on digital as research shows that the target audience consumes pandemic-related info primarily online or through digital media. Sixty-six percent of consumers ages 18-34 consider social media as a vital piece of staying connected with people in their city, town or local community during the pandemic.

The social messages direct consumers to a microsite that encourages users to take the “Don’t Go Viral” Pledge and provides links to pertinent COVID-19 information as well as shareable content to encourage mask wearing.

To reach the audience during peak summer weekends, the campaign also uses out-of-home aerial banner ads flown over Hampton Beach (the most popular beach in the state) and a mobile billboard truck that travels during peak periods through downtown Portsmouth and along Hampton Beach areas.

GYK Antler brought the project from concept through to delivery in less than 25 days, partnering with SilverTech for the microsite implementation.

“Sometimes you have to shake people by the shoulders to get a message across,” says Andrew Harris, GYK Antler Creative. “That was definitely part of our creative approach with this campaign. We wanted to get the attention of our audience with language they understood, but in a way that clearly drove home the potential consequences of not acting in a way that keeps public safety in mind.”