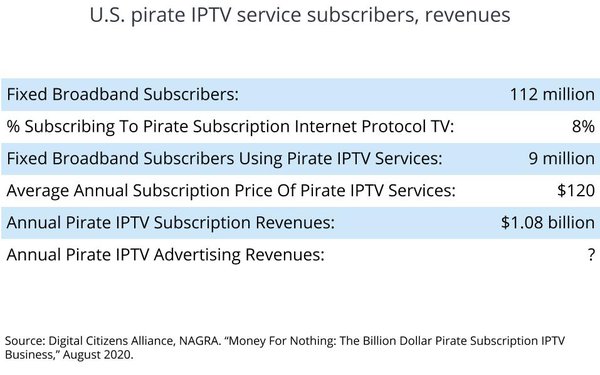 A subscriber here, and a subscriber there, and pretty soon you’re talking real money in the pirate Internet Protocol TV (IPTV) business. Actually, it’s now worth more than $1 billion in the U.S. alone, according to a study released Thursday by the Digital Citizens Alliance and technology firm NAGRA.

The report estimates about 9 million fixed broadband subscribers in the U.S. currently subscribe to at least one of 3,500 online “storefronts” retailing these services, which enable consumers to stream and download pirated copyrighted movies and TV programming.

With an average annual subscription price of $120, the report, “Money For Nothing,” estimates U.S. pirate IPTV subscription revenues currently are about $1.08 billion.

A spokesman was not able to provide an estimate for pirate IPTV ad revenues at presstime, but a 2016 study conducted by Ernst & Young for Trustworthy Accountability Group (TAG) estimated pirate advertising revenues were about $111 million that year, “including $36 million from premium advertisers and $36 million from non-premium advertisers, such as gaming, dating and virtual private network security services.”

The TAG report also noted that bona fide industry protocols and verification vendor services successfully blocked “an estimated $102 million to $177 million out of the pirates’ pockets.”

But even without an accurate accounting of pirate ad revenues, the new report illustrates the profitability of subscription revenues for pirate IPTV services, and the DCA says it should raise alarms about the threat piracy poses through personal and financial risks to consumers from malware spread through pirate apps.

“The scope of the risk to consumers, small businesses and others is in direct proportion to the size of the industry, which is why we need to stop the reach and depth of this ecosystem before it grows even bigger,” DCA Executive Director Tom Galvin states, adding. “This report underscores how outdated laws and a lack of focus and enforcement has let thieves, hackers, and scammers create a major criminal enterprise.”