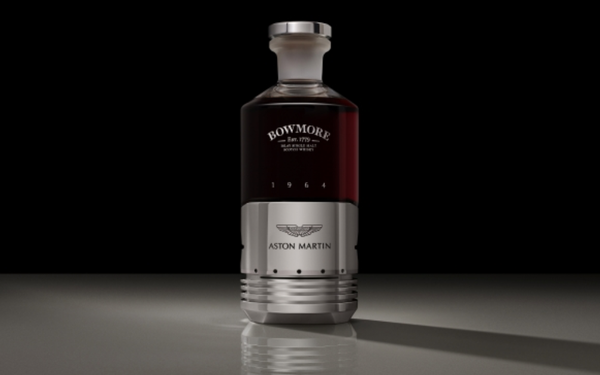 The partnership “brings together an iconic whisky and a legendary car in a bottle of equal parts, featuring exceptional single malt and a genuine Aston Martin DB5 piston,” according to the companies.

The Black Bowmore DB5 bottle is handcrafted by Glasstorm, a bespoke contemporary glass studio, based in North East Scotland.  Each bottle took up to one week to be complete.

The bottle is presented in a handmade presentation box. Inspired by the distillery’s coastal home, the calfskin box is deep blue and embossed with waves.

The significance of 1964? It represents a “truly defining era of evolution for both Bowmore and Aston Martin.”

For Aston Martin, this was the era of its most iconic car, the Aston Martin DB5, linked to the world’s most celebrated secret agent in 1964.

First distilled on Nov. 5, 1964, over the years Black Bowmore has become one of the rarest single malt whiskies ever created.

This latest release represents only the sixth bottling of this single malt. Since 1993, only around 6,000 bottles of Black Bowmore have been made available, thus adding to its desirability.

The partners are set to unveil a series of collaborative projects over the coming months and years including design-led product initiatives.

“Drink Smart”messaging will be integrated into all brand activations around the partnership, ensuring communication with legal-purchase age adults about making informed, responsible choices.