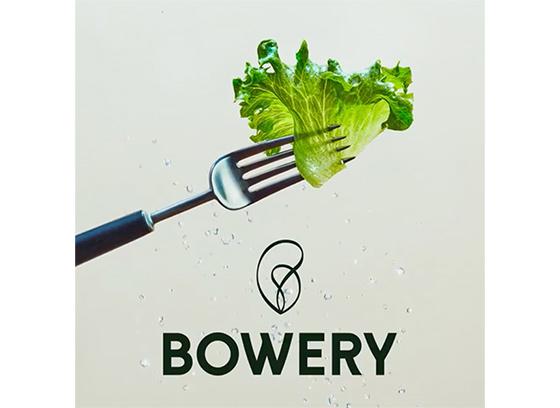 For decades, consumers have been on a quest for cleaner, safer produce — and agricultural methods that are good for both the palate and the planet.

Grown indoors, lettuces, greens and herbs are non-GMO, free from pesticides “and grown with complete transparency,” says Katie Seawell, Chief Marketing Officer. “We are deeply committed to increasing access to high-quality delicious food. We’re going to build an enduring brand — we hope a generational brand — that emotionally connects with consumers.”

Its main selling point? “Our produce tastes better, too, and that means a lot to our core audience.”

At present, the vast majority of produce isn’t branded, “and highly commoditized, not unlike coffee used to be,” she says. “I spent 15 years at Starbucks before joining Bowery a year ago, and I see a lot of similarities. Starbucks is a very mission-driven company, and so is Bowery. We are committed to disrupting the food-supply vision. And through technology, we want people to think differently about how we grow the food we eat.”

Currently, Bowery is selling its products in retail chains such as Walmart, Giant and Whole Foods Market. It’s also available on Amazon Fresh and believes ecommerce will be one of its biggest sources of growth. “It’s a great cross-section of retailers, and part of our goal-to democratize access to our produce.”

Seawell says it is preparing ads set to break later this year, based on consumer research that uncovered ongoing concerns about widespread lettuce recalls for problems like E. coli and Cyclospora infections.

Mustache is the ad agency, and it also worked with Red Antler for a brand refresh and a new website.

So far, Bowery has two farms in Kearny, New Jersey, and a third outside of Baltimore. With its modular technology, it hopes to expand soon. Providing fresh food for underserved communities is also part of its mission, which translates into partnerships with nonprofits, including DC Central Kitchen and Table to Table.

Correction: An earlier version of this story misspelled CMO Paula Seawell’s name, as well as the location of two of its farms. They are in Kearny, New Jersey.