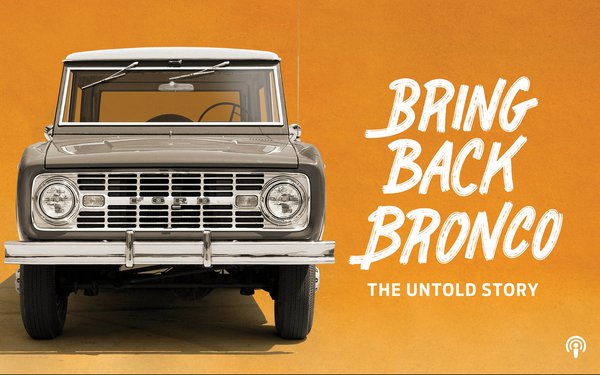 Ford Motor Co. is capitalizing on the intense fandom surrounding the recently revived Bronco SUV in a podcast called “Bring Back Bronco.”

The biweekly series, produced by podcast agency Pacific Content in conjunction with GTB, takes a journalistic approach to storytelling about Bronco, touching on everything from the birth of the iconic SUV and its life until it was cancelled in 1996, including the notorious police chase in 1994 involving O.J. Simpson.

This is new territory for the brand, marking a shift in overall strategy in marketing and plans to reach new consumers, says Mark Truby, the automaker’s chief communications officer.

It’s not as if Bronco needs any help in the sales department. The limited first edition sold out its 3,500 run in record time, less than 24 hours after pre-orders began in mid-July, prompting Ford to double the production to 7,000, (those are all claimed, too).

But telling a compelling story like Bronco’s generates enthusiasm for the overall Ford brand. Truby compared it to the Guinness Storehouse in Dublin, which immerses visitors in the brand’s history and production and leaves them feeling more connected to the product as a result.

The first two episodes are entertaining for history buffs as well as auto enthusiasts. The storytelling puts the brand into context of what was happening in the world at varying times during its first run.

“We said from the start, let’s just tell the story as it is, and make it as interesting as we possibly can, and not gloss over anything, even if it’s not something we would prefer didn’t happen,” Truby says. “So that’s what we went for. We really want to honor people who are going to spend their time listening to it.”

Despite any negative associations, the brand has an enormous fan base, including a group of Ford executives called the Bronco Underground that championed its revival. Personally, if I had a dollar for every time someone has asked me about the revival of the Bronco the last few years, I could take a nice vacation.

BMW partnered with The New York Times for a 6-episode branded podcast to help launch the BMW X7, created by Interpublic Group’s UM with T Brand Studio and The Infatuation.

The series focused on six cities and their unique cultural and culinary experiences -- with a local chef preparing a signature meal and then sharing it with the city's artists and activists. It was the top food podcast in March 2019 in Apple Podcasts and was ranked no. 78 nationally.

Ford began considering the Bronco podcast about a year ago, Truby says.

“We create a lot of video content but don’t do anything in the audio space,” he says. “So we started to think about what might be appropriate.”

This is the first Ford podcast, but the idea is it won't be the last. Truby wants to use greater journalistic techniques to tell Ford's stories going forward. Autonomous vehicles could be an interesting subject for another series, he says.

“If this one does well and we get a good response to it, maybe we will,” Truby says. “This is one where there’s a natural interest. If we put one out about the Ford Fusion, I’m not sure that it would do as well. It’s a great car, don’t get me wrong, but it’s not iconic, it doesn’t have the same pent-up interest, there aren’t fan groups dedicated to it. You have to pick your spots.”