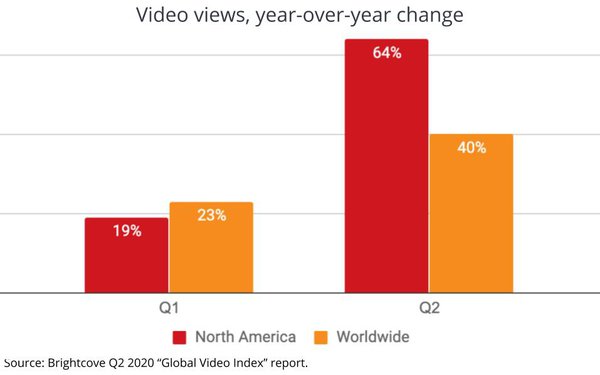 After surging to new highs during the first quarter, video views of content watched on internet-connected devices soared to all-time highs during the second quarter of 2020, according to new estimates released this morning by Brightcove.

North American video views expanded much faster than the rest of the world during the second quarter, as much of the U.S. enacted stay-at-home and social distancing rules.

North American "video views were up year-over-year, with April seeing the biggest increase in consumption (103%)," reads the report, noting that every device -- connected TVs (CTV), smartphones, tablets and personal computers -- "saw gains exceeding 80% in the month.

"May, meanwhile, saw an increase of 39% and June was up 53%."
Overall, views soared 64% during the second quarter and 41% during the first half of 2020.
"CTV viewing gains rose 548%, although the actual number of views remained small," Brightcove analysts, added, explaing that "CTVs have just a 3% share of views."
"CTV views also jumped 428% in the first half of the year compared to a year ago, the report continues, adding, "Computers, meanwhile, lost views, dipping to a 49% share in the second quarter from 56% a year ago. Combining the viewing share on smartphones (41%) with tablets (7%) brings the share of views on mobile devices essentially even with computers."