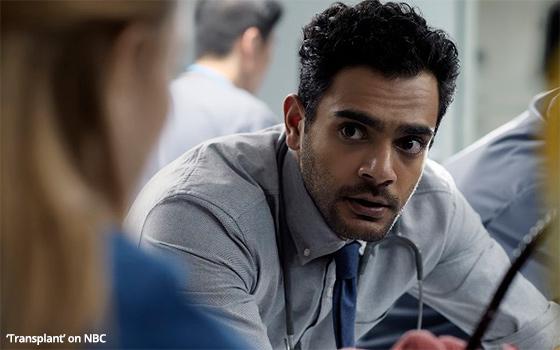 What can one say about yet another new hospital show? That it’s better, or worse, than the last 20 of them?

Like most of them, this new one -- titled “Transplant” -- is like all the others in its broad strokes.

Premiering Tuesday on NBC, “Transplant” takes place in a big-city hospital, where we meet the diverse emergency room staff in the very first episode as they deal with an accident resulting in multiple victims and injuries.

We see this staff of over-eager residents, jaded veterans and other personnel rush about the ER, and hear them engage in urgent debates over diagnoses and procedures. This is nothing new.

Nor are the rivalries and other interpersonal relationships that we soon discover in the midst of these interactions. Like a hundred other hospital shows that have come before it, “Transplant” threatens to become a medical soap opera.

The premiere episode also contains the kinds of queasy scenes that have become a hallmark of modern-day medical dramas on TV.

In the aftermath of the accident that happens in the episode, a restaurant cook performs emergency procedures on three victims and saves their lives.

Without going into the grisly details, one of the procedures involves a power drill. Another requires that a small sharp blade be used perilously close to a man’s eye.

Later in the episode, it becomes somewhat clearer, from the standpoint of storytelling, why we had to endure watching these makeshift surgeries.

This has to do with the restaurant worker who performed them. In an effort to avoid revealing too much of what happens in the show, let us just say that grilling kebabs in a Middle Eastern restaurant is not the only skill this guy possesses.

While “Transplant” resembles dozens of other TV medical shows in the various ways outlined above, it diverges from them in the person of that restaurant cook with a mysterious past.

He is a great character who rivets your eyes and ears in every scene he is in, which happens to be most of them. He steals the show and makes it worth watching.

He is played by Hamza Haq (pictured above), a Canadian actor born in Saudi Arabia to Pakistani parents, according to his NBC bio.

With the focus on Haq’s character, the title of “Transplant” is meant to have a double-meaning. One refers to the practice of medicine -- i.e, transplanting organs.

The other refers to the challenges this character faces as he tries to build a new life for himself and his young sister in Canada after emigrating from a place that is much different than Canada.

As a matter of fact, this series comes to NBC from Canada, where it has already been airing since February.

Like the many British-made shows that have turned up recently on American television (and written about here), it seems as if Canada might also emerge as a content supplier to American TV, now that U.S. TV production has been delayed due to COVID-19 and its restrictions.