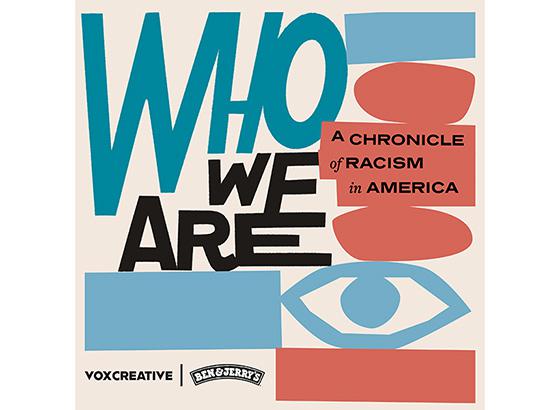 Vox Media has partnered with ice-cream company Ben & Jerry’s to release a podcast examining the history of racism in America.

The podcast, called “Who We Are,” is produced by Vox Media’s brand studio, Vox Creative.

The podcast will debut on September 15. Each 30-minute episode will focus on a different period in American history and its link to modern-day systemic racism.

Every episode will end with a call-to-action.

Vox Media also worked with The Who We Are Project to produce the podcast, which is based on ACLU deputy legal director Jeffery Robinson’s presentation of the same name. The three-hour presentation will soon be released as a documentary.

The Who We Are Project is a nonprofit organization founded by Robinson, with the goal of educating Americans on the history of anti-Black racism in the United States.

Robinson will serve as executive producer and legal authority on the “Who We Are” podcast. He is also the director of the ACLU Trone Center for Justice and Equality.

”Who We Are” will “show the hidden ways legal discrimination and state-sanctioned brutality continued long after slavery ended, profoundly limiting Black Americans’ ability to gain access to jobs, housing, education, and health care; or to create and accumulate wealth,” according to Vox Media.

The “Who We Are” podcast will be hosted by New York Times bestselling author, memoirist and podcaster Carvell Wallace, who is also a regular contributor to The New York Times Magazine.

Ben & Jerry’s has been working on implicit bias, the school-to-prison pipeline and criminal justice reform as part of its Justice ReMix’d campaign.

Vox Media’s brand The Verge also has a new project out, examining the documentation of police brutality. The “Capturing the Police” series will be edited and produced by Verge reporter Bijan Stephen and video producer Mariya Abdulkaf.

Abdulkaf is also the chair of Vox Media’s diversity and equity committee and the chair of the Black Employee Resource Group. The editorial initiative explores the activism and trauma that results from videos of police brutality.

It also looks at how surviving a police shooting turned a teenager into an activist, research on the subjectivity of police body cameras, mutual aid networks providing support for Black Lives Matter protesters and how politicians have responded to pressure from activists.

The project builds on The Verge’s 2019 project “Fearin g for his life,” in which Chloé Cooper-Jones profiled Ramsey Orta, who filmed the killing of Eric Garner.
activism, african american, podcasts, politics
Next story loading